President Trump Asked The Proud Boys To "Stand By." Who Are They?

The group likely has several hundred members with chapters in most states and some other countries, according to the Anti-Defamation League (ADL), an anti-hate organization. 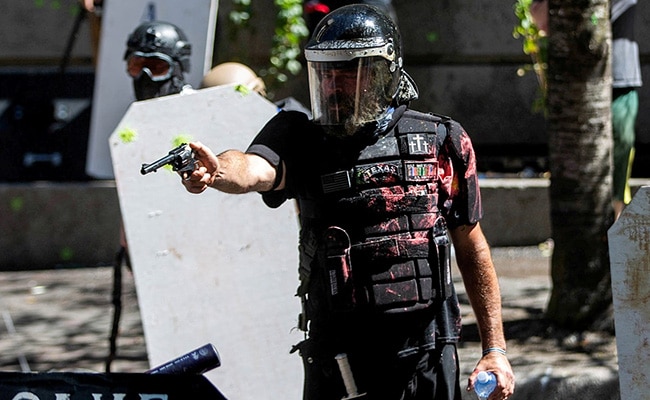 The Proud Boys were established during the 2016 US election by Vice Media co-founder. (File)

President Donald Trump, asked if he would denounce white supremacists and militia groups during Tuesday night's U.S. presidential debate, told the right-wing group the Proud Boys to "stand back and stand by."

Who Are The Proud Boys?

The Proud Boys were established during the 2016 U.S. election by Vice Media co-founder and Canadian-British right-wing activist Gavin McInnes, who has since distanced himself from the group.

The group likely has several hundred members with chapters in most states and some other countries, according to the Anti-Defamation League (ADL), an anti-hate organization. They drew media attention in late 2018 after a violent confrontation with left-wing protesters in New York City, and returned to the spotlight during protests in recent months.

They describe themselves as a male-only club of "Western chauvinists" who "refuse to apologize for creating the modern world." The group, whose membership is multiracial, has been called out for misogynistic, anti-Muslim and anti-immigration rhetoric by advocates who monitor extremism.

Group members tend to adhere to an ideology that rejects overt white supremacy but embraces chauvinism, according to the ADL.

Last year, two members of the group were sentenced to four years in prison for their role in a violent 2018 brawl with anti-fascist protesters following a speech by McInnes at a Republican club in New York City.

Why Were They Mentioned During The Debate?

Debate moderator Chris Wallace asked Trump if he was willing to condemn white supremacists and militia groups and tell them to "stand down" and not add to violence during recent protests in U.S. cities such as Portland, Oregon, and Kenosha, Wisconsin.

Trump agreed to do that, asking, "Who would you like me to condemn?" Biden interjected: "The Proud Boys."

Trump then urged the Proud Boys to "stand back and stand by," but quickly turned the conversation to antifa, a left-wing anti-facist ideology, whose adherents he has blamed for violence at protests in recent months.

In a Proud Boys channel on the messaging app Telegram, members shared a version of their logo that included the words "stand back, stand by" following Trump's remarks.

Joe Biggs, a Proud Boys member, celebrated the group's mention on the social media platform Parler, saying: "President Trump told the proud boys to stand by because someone needs to deal with ANTIFA...well sir! we're ready!!"

On Wednesday, Trump walked back his remarks at the White House, telling reporters he was not familiar with the Proud Boys, but that the group should let law enforcement do its work.

How Are The Proud Boys Tied To Recent U.S. Protests?

The group has clashed violently with Black Lives Matter and antifa demonstrators in Portland and other cities in recent months. At rallies, members are often clad in black and yellow polo shirts, wear body armor, and carry weapons, including firearms, paintball guns and baseball bats.

Before a Proud Boys rally in Portland last Saturday, Oregon's Democratic Governor Kate Brown declared a weekend state of emergency for the city, citing an imminent risk of civil disturbance that threatened injury or loss of life.

The rally, which attracted hundreds of Proud Boys supporters, was largely peaceful, but police and left-wing protesters later clashed in downtown Portland.

Are The Proud Boys A Hate Group?

The Southern Poverty Law Center (SPLC), another anti-hate advocacy organization, labeled the Proud Boys a hate group in 2018. McInnes sued the organization over the hate designation in February 2019, saying it was "purposefully deceitful" and meant to hurt his reputation.

The case is still ongoing and lawyers for both parties did not immediately respond to requests for comment.

Oregon's Governor Brown criticized the Proud Boys in a tweet on Wednesday. "Let's be clear: The Proud Boys are white supremacists," she said. "Racism and hate are not forms of patriotism."