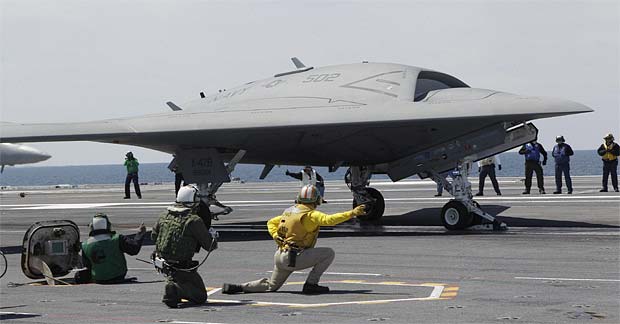 Aboard the USS George HW Bush: The US Navy made aviation history on Tuesday by launching an unmanned jet off an aircraft carrier for the first time, taking an important step toward expanded use of drones by the American military with an eye on possible rivals like China and Iran.

The bat-winged X-47B stealth drone roared off the USS George HW Bush near the coast of Virginia and flew a series of pre-programmed maneuvers around the ship before veering away toward a Naval air station in Maryland where it was scheduled to land.

"This is really a red-letter day. May 14 we all saw history happen" said Rear Admiral Ted Branch, the Atlantic naval air commander. "It's a marker ... between naval aviation as we've known it and the future of naval aviation with the launch of the X-47B."

Because of its stealth potential and a range nearly twice that of the F-35 Joint Strike Fighter, the X-47B and its successors are seen as a potential answer to the threat posed by medium-range anti-ship missiles developed by China and Iran, defense analysts said.

The missiles and other so-called anti-access, area-denial weapons would force U.S. aircraft carriers to operate far enough from shore that piloted aircraft would have to undergo refueling to carry out their missions, leaving them vulnerable to attack.

But with a range of 2,000 nautical miles, an unmanned jet like the X-47B could give the Navy both a long-range strike and reconnaissance capability.

"That makes it strategically very important," said Anthony Cordesman, a senior defense analyst at the Center for Strategic and International Studies. He described the drone as "essentially a really long-range stealth system."

"As we rebalance to the Pacific, the Navy is going to increasingly need range," said Brien Alkire, a senior researcher at RAND's Project Air Force. "That's something an unmanned system can bring them that they don't really have right now and give them the ability to operate from a good standoff range.

The X-47B, one of only two demonstrator models made by Northrop Grumman Corp, carries the equivalent of two precision-guided bombs. It was catapulted from the aircraft carrier on Tuesday using the same sling-shot system that sends manned aircraft aloft.

It is scheduled to undergo two weeks of testing aboard the carrier leading up to a landing on the ship, in which a plane's tailhook grabs a wire that will slow it and keep it from plunging overboard.

While the carrier takeoff represented a significant milestone, defense analysts are focused on the next step, when the Navy attempts to use what has been learned with the X-47B to develop an unmanned aircraft for actual operations.

"The X-47B is a great story," said Mark Gunzinger, a defense analyst at the Center for Strategic and Budgetary Assessments think-tank. "It's a milestone and a step forward for unmanned, carrier-based aviation. But I think the real story is what's next. How do we operationalize this capability?"

Future variants of the drone could probably be designed for full-spectrum broadband stealth, which means it would be hard for radar to locate it, analysts said. That level of stealth would be one of the drone's major defenses.

US drones currently in use in places like Afghanistan and the tribal areas of Pakistan, like the Predator and Reaper, are not up against any air defenses and are not stealthy aircraft.

Because of its long range and the Navy's need to have it take off and land, day and night, from an aircraft carrier, the X-47B has been designed to operate with far greater autonomy than the remotely piloted aircraft currently in use.

That has raised concerns among some organizations worried about the heavy US reliance on drones in warfare and the rising use of autonomous robots by the American military.

Human Rights Watch, in a report launching its recent campaign against "killer robots," cited the X-47B as one of several weapons that represent a transition toward development of fully autonomous arms that require little human intervention.

A follow-on program - known as the Unmanned Carrier Launched Airborne Surveillance and Strike System, or UCLASS - is expected to build on what was learned with the X-47B to produce operational aircraft.

Promoted
Listen to the latest songs, only on JioSaavn.com
An initial request for design proposals is expected to be issued by the Navy sometime this month. Other aircraft makers, from Lockheed Martin Corp and Boeing to General Atomics - are expected to compete to participate.