The man's tongue is almost as big as a "ping pong ball", states the Guinness World Records on its website 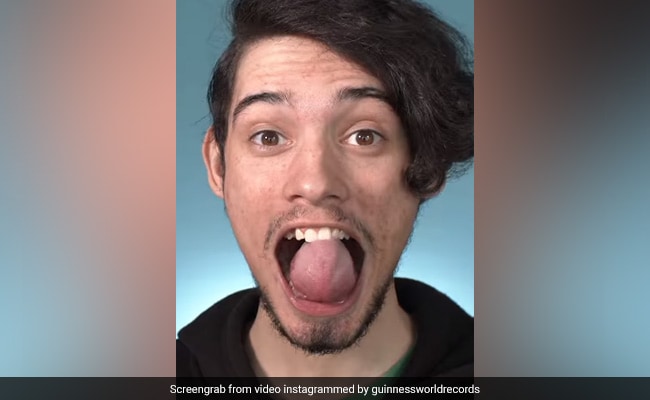 The man referred to his tongue as a "gift"

A man based in the US has set a world record for having the largest tongue circumference . Dante Barnes of Battle Creek, Michigan, USA, has a tongue whose circumference measures 12.19 cm (4.80 in).

In a video released by Guinness World Records on Instagram, Mr Barnes talked about his tongue, referring to it as a “gift”. He said that he had never imagined that he would have a world record for anything, “let alone for my tongue”.

“I just kind of have fun with it,” he continued, and said that he could have a good time with people, entertain them, and then shrink it back down to a regular tongue whenever he wanted to do normal things.

In another video on YouTube, Mr Barnes also holds a ping pong ball next to his tongue, just for reference.

Mr Barnes is not aware why his tongue is so massive. He said in a statement, “I have not had an actual medical person tell me what it is that I can do or what it's called but I have had people make videos about my tongue and they say it's called macroglossia.”

An average human tongue's circumference is way lesser than Mr Barnes' tongue. Despite the extraordinary size of his tongue, he can manoeuvre it easily as we all can. He said that he could flex it just like any other muscle, “like moving your fingers or lifting a weight”.

Guinness World Records has other world records related to the tongue. Nick Stoeberl from Salinas, California, USA, holds a record for the world's longest tongue (male), measuring at 10.1 cm (3.97 in). Chanel Tapper from Los Angeles, California, USA, holds the title of the world's longest tongue (female) measuring at 9.75 cm (3.8 in).