The incident happened during the week of nationwide protests against the custodial killing of African-American George Floyd in Minneapolis on May 25. 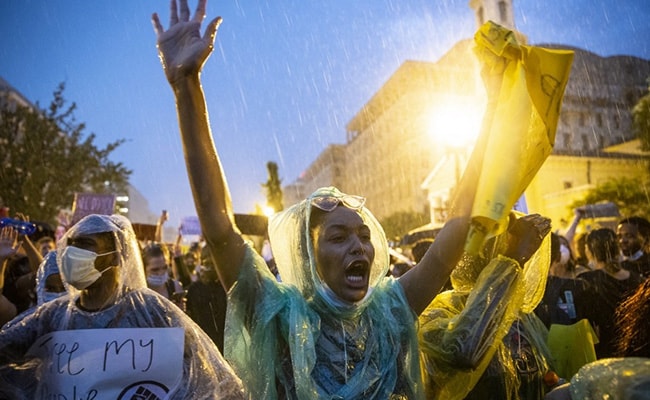 The statue, which is across the road from the Indian Embassy, was vandalised with graffiti (File)

The vandalisation of Mahatma Gandhi's statue in Washington DC is disrespectful and such incidents do not bring people together, top US lawmakers have said.

The statue, which is across the road from the Indian Embassy, was vandalised with graffiti and spray painting on Wednesday, prompting the mission to register a complaint with the local law enforcement agencies.

The incident happened during the week of nationwide protests against the custodial killing of African-American George Floyd in Minneapolis on May 25.

The Trump campaign termed the incident "very disappointing", while US Ambassador to India Ken Juster apologised, saying sorry to see the desecration of the Gandhi statue.

The incident is reported to have taken place on the intervening night of June 2 and 3, officials said.

"More evidence that violent radicals and run of the mill crazies have hijacked legitimate protests to create anarchy or for their own purposes," Senator Marco Rubio said on Thursday.

Vandalising Mahatma Gandhi's statue outside the Indian Embassy has nothing to do with what the protests are about, the senator said.

Protests against the custodial killing of George Floyd turned violent in some places in the US and prestigious monuments were damaged. In Washington DC this week, protestors burnt a historic church and damaged monuments like the Lincoln Memorial.

"It's disgraceful to see the defacing of the Gandhi statue in DC," North Carolina Senator Tom Tillis said.

"Gandhi was a pioneer of peaceful protesting, demonstrating the great change it can bring. Rioting, looting and vandalizing do not bring us together," he said.

The vandalized statue of Mahatma Gandhi, the design of which was created by Gautam Pal, has been covered and efforts are on clean up the site at the earliest.

"We condemn this disrespectful act and are working with the relevant authorities and the Embassy of India to rectify the situation," a state department spokesperson said.

Ms Guilfoyle tweeted along with a quote of Gandhi: "Our ability to reach unity in diversity will be the beauty and the test of our civilization."

US Ambassador to India, Ken Juster said, "So sorry to see the desecration of the Gandhi statue in Wash, DC. Please accept our sincere apologies."

"Appalled as well by the horrific death of George Floyd and the awful violence and vandalism. We stand against prejudice & discrimination of any type. We will recover and be better," he said in a tweet.

One of the few statues of a foreign leader on a federal land in Washington DC, the statue of Gandhi was dedicated by the former prime minister Atal Bihari Vajpayee, in the presence of the then US president Bill Clinton on September 16, 2000, during his state visit to the US.