The tweet posted by Matt Gaetz, a second-term Republican from Florida's Panhandle who is closely allied with Trump, suggested that compromising information about Cohen's private life might soon be released. 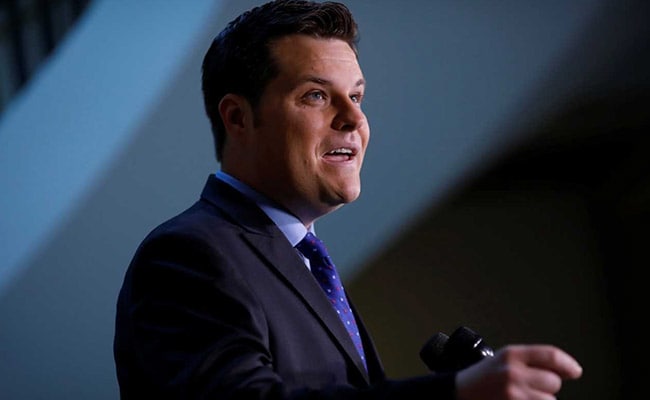 US Representative Matt Gaetz has come under Florida state bar scrutiny for a Twitter message that critics said was meant to intimidate President Donald Trump's former personal lawyer Michael Cohen, the night before his public testimony on Capitol Hill.

The tweet posted by Gaetz, a second-term Republican from Florida's Panhandle who is closely allied with Trump, suggested that compromising information about Cohen's private life might soon be released.

"Hey @MichaelCohen212 - Do your wife & father-in-law know about your girlfriends? Maybe tonight would be a good time for that chat," Gaetz tweeted on Tuesday. "I wonder if she'll remain faithful when you're in prison. She's about to learn a lot..."

Cohen, the president's one-time "fixer" who has turned against his former boss, is scheduled to begin serving a three-year federal prison sentence in May after pleading guilty to tax evasion, bank fraud and campaign finance violations.

On Wednesday, a spokeswoman for the Florida Bar said the organization was examining the matter.

"The Florida Bar is aware of the comments made in a tweet yesterday by Rep. Matt Gaetz, who is a Florida Bar member, and I can confirm we have opened an investigation," the spokeswoman, Francine Walker said in a statement.

"Any time the words or actions of a Florida lawyer result in complaints, the Florida Bar will fully investigate those complaints," Walker said. She declined to discuss the Gaetz case further, citing confidentiality rules.

Lanny Davis, an attorney for Cohen, denounced the "despicable lies and personal smears" contained in the tweet and called on lawmakers from both parties to "repudiate his words and his conduct."

Gaetz initially defended his tweet, shrugging off criticism that his message could be construed as witness tampering.

Gaetz later apologised on Twitter, saying he was deleting the tweet in question and insisting his aim was to "create context" around Cohen's testimony.

"It was NOT my intent to threaten, as some believe I did," wrote Gaetz, who is not a member of the House of Representatives Oversight Committee where Cohen appeared on Wednesday. "I should have chosen words that better showed by intent. I'm sorry."

In nationally televised testimony on Wednesday, Cohen, 52, assailed Trump's character, calling him a "conman" and "cheat" who knew in advance about the release of stolen emails aimed at hurting his Democratic rival in the 2016 presidential race.

Trump has denied any collusion between his campaign and Moscow. Russia denies US intelligence agencies' assertions that it interfered in the election.