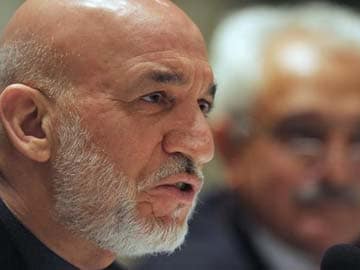 Washington: The US director of national intelligence said on Tuesday he does not expect Afghan President Hamid Karzai to sign a bilateral security agreement with the United States.

The Obama administration has been pressing Karzai to sign a security pact that would authorize US troops to remain in Afghanistan after 2014. Karzai has refused so far to sign, although Washington insists a deal must be approved before it will agree to leave a troop contingent in Afghanistan.

"I don't believe that President Karzai is going to sign it," National Intelligence Director James Clapper said when asked at a US Senate Armed Services Committee hearing if it would best if Washington simply waited for the election of a new Afghan president for the signing of an agreement.

The United States would like to leave more than 10,000 troops in Afghanistan for counterterrorism and training of Afghan forces after US forces formally withdraw at the end of this year following a 13-year mission in Afghanistan that began after the September 11, 2001, attacks.

The White House says that in the absence of a bilateral agreement, all US forces will withdraw at the end of the year and that a decision by Karzai is needed within weeks.

Karzai has called that an empty threat and suggested any security deal could wait until after Afghanistan's April elections.

In his opening statement at the hearing, Senator Carl Levin, the Michigan Democrat who chairs the committee, criticized Karzai.

Promoted
Listen to the latest songs, only on JioSaavn.com
"Whoever the next Afghan president is, he is likely to be more reliable than President Karzai, and his signature is likely to instill more confidence than would Karzai's signature," Levin said.

NATO chief Anders Fogh Rasmussen said earlier this month that Karzai was unlikely to sign a pact and would probably leave the choice for his successor.
© Thomson Reuters 2014