US Fails At UN To Weaken Measure On Sexual Harassment

France and the Netherlands led negotiations on the draft which this year for the first time included language on combating sexual harassment, in response to the #MeToo movement. 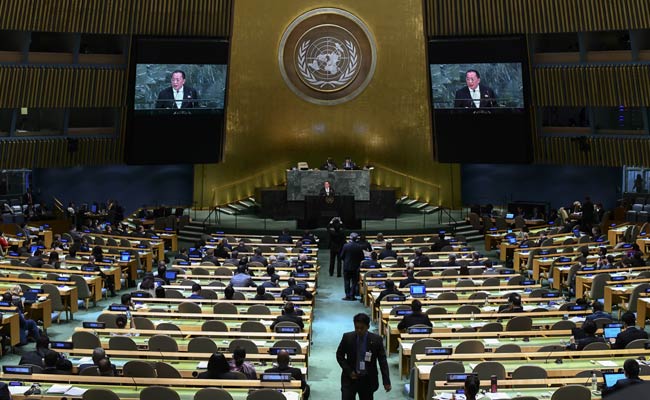 The United States failed on Monday to water down a UN resolution on combatting sexual harassment and violence against women despite backing from Russia, China, India, several Muslim countries and the Vatican.

President Donald Trump's administration sought to scrap language in the non-binding resolution on access to reproductive health care services, safe abortions and recognizing the right of women to decide on matters related to their sexuality.

France and the Netherlands led negotiations on the draft which this year for the first time included language on combating sexual harassment, in response to the #MeToo movement.

Two amendments to the text presented by the United States were rejected in votes at a General Assembly committee. Israel, which usually backs the US position at the United Nations, voted against the US proposals, as did European countries.

"Make no mistake, these amendments are hostile," French Ambassador Francois Delattre told the assembly, arguing that language contained in the draft was taken from agreed texts such as the Beijing Declaration on women's rights and should not be contentious.

The resolution was adopted by consensus by the committee, but the United States then took the floor to say that it was disassociating itself from the vote.

US diplomat Courtney Nemroff said her government took issue with references to abortion and to descriptions of sexual harassment as violence, which US legislation considers to be physical violence.

"We do not recognize abortion as a method of family planning, nor do we support abortion in our reproductive health assistance," said Nemroff.

A similar US bid last week taking aim at reproductive health for girls in a resolution on forced marriage also failed.

The French ambassador criticized the US shift that has seen Washington align with some of the world's least progressive governments on women's issues.

"We need America in this fight against sexual harassment, in keeping with the values that it has always upheld with us," Delattre told AFP.

Some UN diplomats say the US push for changes to language is being directed by ultra-conservative supporters of US Vice President Mike Pence, a staunch opponent of legal abortion.

The US move to weaken UN language has been greeted with dismay by European diplomats who privately raise concern that Washington is gearing up for a diplomatic battle in other UN fora to roll back women's rights.

Last year, the US administration cut all funding to the UN Population Fund, which provides family planning services and access to reproductive health care in some countries.

As the committee debated, UN Secretary-General Antonio Guterres told the launch of a UN awareness-raising campaign that violence against women and girls was a "global pandemic."

"Not until the half of our population represented by women and girls can live free of fear, violence and everyday insecurity, can we truly say we live in a fair and equal world," said Guterres.