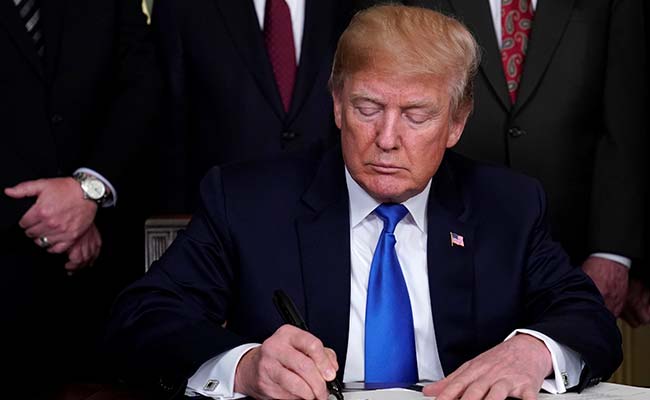 Washington, United States: The United States joined Britain's allies in Europe and around the world Monday in expelling scores of suspected Russian spies in an unprecedented response to a nerve agent attack.

At least 114 alleged agents working under diplomatic cover were ordered out by 21 governments, dwarfing similar measures in even the most notorious Cold War spying disputes, and marking a British diplomatic victory.

Washington led the way, ordering out 60 Russians, in a new blow to US-Russia ties less than a week after President Donald Trump congratulated Vladimir Putin on his re-election.

Canada, Ukraine, Albania, Australia, and most European Union states matched the move with smaller-scale expulsions, after Britain urged allies to respond to the poisoning of double agent Sergei Skripal.

Russia has denied it was behind the attempted assassination, which left Skripal and his daughter gravely ill in perhaps the first nerve agent attack in Europe since World War II.

It warned that there would be a tit-for-tat response to those countries "pandering to British authorities" without, Moscow claims, fully understanding what had happened.

But Western officials made it clear in announcing the expulsions that they share Britain's assessment that only the Kremlin could have been behind the March 4 incident in Salisbury, England.

White House spokeswoman Sarah Sanders said Washington and its allies were acting "in response to Russia's use of a military-grade chemical weapon on the soil of the United Kingdom."

The strong language contrasted with the warm words Trump shared with Putin last week, when he overrode his advisors' concerns and congratulated his opposite number Putin on his election win.

"The United States stands ready to cooperate to build a better relationship with Russia, but this can only happen with a change in the Russian government's behavior," Sanders said.

US officials said that 48 "intelligence officers" attached to Russian diplomatic missions in the US would be expelled, along with 12 accredited to the United Nations in New York.

"Once that deadline has passed the properties will no longer enjoy diplomatic status or protections," a State Department official told AFP.

"On the deadline day, Diplomatic Security will conduct a walk through to confirm that the Russians have indeed vacated the premises ... we will invite the Russians to accompany us on that walk through."

Trump's ambassador to the UN, Nikki Haley, welcomed the move and said: "Here in New York, Russia uses the United Nations as a safe haven for dangerous activities within our own borders."

Spokeswomen for the White House and the State Department, along with Haley and US ambassador to Moscow Jon Huntsman condemned the alleged Russian attack.

But Trump himself, who usually likes to tweet or hold a press event for major announcements, was silent.

In addition, the Russian consulate general in Seattle will be closed, the White House said, because of its proximity to a US submarine base and a plant run by private aerospace giant Boeing.

This represents the largest US expulsion of Russian or Soviet agents ever and comes after Trump's predecessor Barack Obama expelled 35 in late 2016 over alleged election meddling.

Russia's foreign ministry warned that the "unfriendly step by this group of countries will not pass without trace and we will respond to it."

The Russian embassy in Washington appeared to hint at what this response would be.

In a tweet, the Russian mission asked followers to vote on which US consulate should be closed, listing those in Vladivostok, St Petersburg and Yekaterinburg as options.

Russia's ambassador to the United States condemned the decision and told state-run Sputnik News: "A serious blow to the quantitative and qualitative composition of the Russian embassy in Washington, DC."

It was not immediately clear how many Russians are assigned to its various US missions, but in 2016 Putin ordered the United States to reduce its Moscow personnel to 455 to achieve parity.

Before the measures were announced, Russia's Foreign Minister Sergei Lavrov had accused Britain of "feverishly trying to force allies to take confrontational steps."

Iceland chose Monday to announce that it would send no government officials to Russia to accompany its team to the football World Cup this summer.

Britain welcomed its allies' decision as a diplomatic and moral victory, after concerns that some would prefer not to offend Moscow despite international horror over the attack.

"I have found great solidarity from our friends and partners in the EU, NATO, America and beyond," Prime Minister Theresa May told parliament.

More than three weeks after the attack, which Britain says was carried out by a nerve agent exclusively developed by Russia, the Skripals are still in a coma in hospital.

A British policeman who was exposed to the nerve agent when he responded to the attack on the former Russian officer has now been released from treatment.

Promoted
Listen to the latest songs, only on JioSaavn.com
A British judge ruled last week that blood samples from former Russian spy Skripal and his daughter Yulia could be taken for testing by the world chemical weapons body (OPCW).