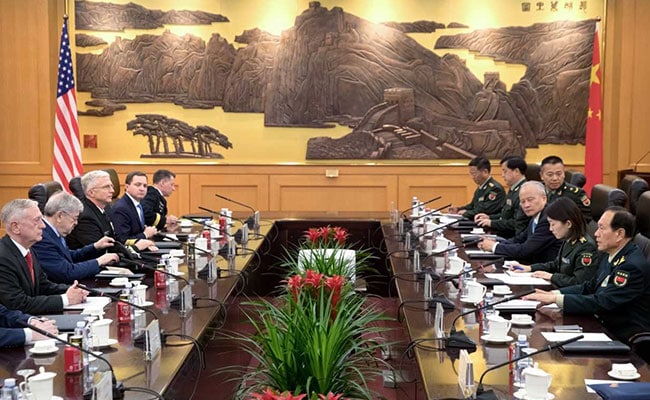 US Defense Secretary James Mattis met his Chinese counterpart in Beijing on Wednesday, aiming to find areas of cooperation despite a mounting military rivalry between the two superpowers.

On his first ever visit to China, the Pentagon chief was greeted at the headquarters of the People's Liberation Army by an honour guard and marching band playing the US and Chinese anthems.

In opening remarks, Defence Minister called the visit critical "to increase the strategic trust between our countries."

He said Mattis' words "carry weight in both the military and political circles back in the United States."

Mattis replied that military relations were crucial to the broader relationship between the two countries and he hoped the discussions would involve "very open and honest dialogue".

Mattis was expected to met President Xi Jinping late Wednesday after talks with other senior officials. His four-day trip to Asia will include visits to regional allies Seoul and Tokyo.

His first meeting with Wei, who became defence minister earlier this year, comes under a cloud of festering tensions over China's placement of advanced weapons systems on built-up islets in the South China Sea, a projection of force that has challenged decades of the US Navy's preeminent presence in the strategically important region.

That, along with rising Chinese pressure on US ally Taiwan, and deepening trade and technology disputes, have elevated the strains between Washington and Beijing to new levels.

Showing the US displeasure with China's recent show of force in the South China Sea -- in which it landed long-range bombers on disputed islands claimed by Beijing -- last month Mattis disinvited the Chinese from an exercise of some two dozen Pacific Rim navies.

And earlier this month, at a security conference in Singapore, Mattis slammed the Chinese militarisation of its Southeast Asia outposts, noting that Xi promised US president Barack Obama three years ago that Beijing would not weaponise the islets.

China's purpose was "intimidation and coercion," Mattis said at the time.

Beijing argues that the islands are Chinese territory and says it has the right to install military facilities to protect its sovereignty.

No official agreements are expected out of the visit, with the Pentagon chief saying he wants to take a measure of his counterparts to assess their long-term strategic intentions.

He also will discuss Chinese cooperation in pressuring North Korea to agree to a denuclearisation programme, currently being negotiated between Washington and Pyongyang.

Mattis toned down his rhetoric ahead of the visit, saying he does not want to "poison" the atmosphere ahead of talks with Xi, Wei and others.

"I think the way to address issues between our two nations is to first establish a transparent strategic dialogue: how do the Chinese see the relationship with us developing, how we see it developing," he said.

Will Allow Women At Universities, But Mixed Classes Banned: Taliban