Chief of staff Mark Meadows was speaking amid a sharp resurgence of the coronavirus across the US, with case numbers setting daily records and the deathsfast approaching 2,25,000. 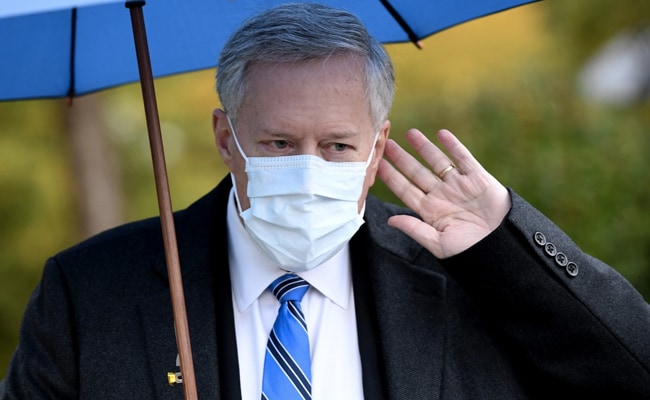 We are making efforts to contain it: Mark Meadows

Donald Trump's chief of staff said Sunday that "we're not going to control the pandemic," drawing a rebuke from the Biden campaign that "they are admitting defeat."

Chief of staff Mark Meadows was speaking amid a sharp resurgence of the coronavirus across the US, with case numbers setting daily records and the deaths  fast approaching 225,000.

When a CNN interviewer asked Meadows why the administration would not get control of the virus, he replied, "Because it is a contagious virus just like the flu."

He then qualified that, saying, "We are making efforts to contain it."

Democrat Joe Biden's running mate Kamala Harris was asked during a campaign stop in Michigan about Meadows' comments and said, "They are admitting defeat, and I've been saying that, and Joe Biden has been saying that since the beginning."

She criticized Meadows for likening the coronavirus to the flu, according to a pool report.

"This is the greatest failure of any presidential administration in the history of America," she said.

Biden and Harris have been hammering Trump over his handling of the pandemic, which has seen the US suffer roughly one-fifth the world death total though its population is only four percent the total.

The disease has reached deep inside the White House itself.

Three weeks after Trump was hospitalized with Covid-19, a spokesman announced Saturday that Vice President Mike Pence's chief of staff, Marc Short, had tested positive -- but added that Pence would nonetheless continue criss-crossing the country in the final days of the campaign.

CNN interviewer Jake Tapper pressed Meadows about Pence, who heads the White House coronavirus task force, seemingly flaunting guidelines of the federal Centers for Disease Control by traveling and not self-quarantining after exposure to Short.

"I can tell you he is wearing a mask and will be wearing a mask today," Meadows said. "Obviously, when you have an exposure you have to take additional mitigation factors."

Harris stayed off the campaign trail briefly after a top aide tested positive.

"We don't mandate masks," he said. "We offer them out. We live in a free society."