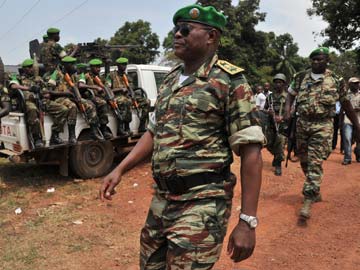 Geneva: Chadian soldiers killed 30 civilians and seriously wounded more than 300 in an indiscriminate attack on a market on March 29 in Bangui, capital of the Central African Republic, a spokesman for the United Nations human rights office said on Friday.

Previously, local officials and aid workers had put the death toll to atleast 10, with 30 wounded.

Chadian soldiers have been at the heart of African efforts to stabilise the Central African Republic(CAR) but its forces have been accused of siding with mainly Muslim Seleka rebels, whose seizure of power, last year, sparked tit-for-tat violence with Christian militia.

Rupert Colville, reporting on a preliminary investigation that had interviewed survivors in hospital and visited the scene, said a convoy of pick-up trucks from Chad's regular army, not part of an African Union peace-keeping force, entered the market in the capital's PK-12 district and started firing.

"As soon as the convoy of the Chadian national army reached the PK-12 market area around 3:00 p.m., it allegedly open fired on the population without any provocation. As people fled in all directions in panic, the soldiers continued to fire indiscriminately.

"At the time of the shooting the market was full of people, including many young women and girls buying and selling produce," Colville told a news briefing in Geneva.

The attack appeared to have stopped when Congolese peacekeepers arrived on the scene, he said.

Several sources said that the Chadian forces had entered Bangui to extract remaining Chadians and other Muslim inhabitants in order to save them from attacks by the anti-Balaka Christian militia, Colville said.

The shooting was the latest in a string of violent incidents involving Chadian troops.

The Seleka seized power a year ago, perpetrating abuses on the majority Christian population that triggered waves of revenge attacks, leading to thousands of deaths and displacing hundreds of thousands.

Under international pressure, the rebels gave way in January to an interim civilian government. But the government - backed by 2,000 French and 6,000 African Union peacekeepers - has been unable to halt attacks by the anti-Balaka on Muslims.

"We've made it very clear and the (UN) Secretary General too has made it very clear that there is a desperate need for a good size peacekeeping force," said Colville. "He has requested 10,000 troops in all. And we're no-where near that number at this point."

Promoted
Listen to the latest songs, only on JioSaavn.com
Chad said on Thursday, it would withdraw its troops from the African Union peacekeeping mission and Colville said he hoped their departure would also prevent further incursions by troops travelling directly from Chad.