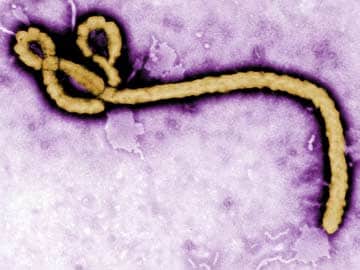 A microscopic view of the Ebola virus. (Reuters)

Monrovia: The United Nations said on Friday it had quarantined 41 personnel from its Liberia mission, including 20 soldiers, following a second infection among its staff of the deadly Ebola virus.

The measure came two days after the mission, known as UNMIL, announced an "international staff member" working in its medical department tested positive after complaining of symptoms consistent with the Ebola virus.

"Following the discovery on October 5 that an UNMIL medical staff member was symptomatic for Ebola, the mission conducted robust contact tracing to ensure all people that came into contact with the staff member while they were symptomatic are assessed and isolated as necessary," it said in a statement.

"As a result of the rigorous contact tracing, 41 staff members who were possible contacts are under close medical observation, including 20 military personnel."

UNMIL, which has 6,000 troops and police in Liberia, said the personnel would undergo "precautionary" observation for the 21-day incubation period of the virus, although none had shown symptoms.

The mission has not revealed the condition or nationality of the Ebola patient but said they were receiving treatment.

The announcement of the infection came a week after UNMIL said a Liberian employee had died of probable Ebola.

The mission said it would extend a review of its actions launched after the first case to investigating the circumstances of the latest infection.

Liberia, the hardest-hit country in the west African Ebola outbreak, has seen more than 2,200 deaths since it announced the virus had spread from Guinea on March 31.

Promoted
Listen to the latest songs, only on JioSaavn.com
UNMIL chief Karin Landgren said last week the mission had taken steps since then to educate personnel and help them protect themselves against Ebola, describing staff safety as her "top priority".

She described the outbreak as "Liberia's gravest threat since the civil war", referring to the back-to-back conflicts from 1989-2003 that left at least 250,000 people dead.