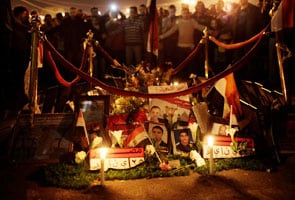 A makeshift memorial for those killed during
protests. (NYT)

Cairo: One revolution ended on Friday. Another may soon begin.

In a moment that may prove as decisive to the Middle East as the 1967 Arab-Israeli war, 18 days of protest hurtled Egypt once again to the forefront of politics in the Middle East. In the uprising's ambition, young protesters, savvy with technology and more organized than their rulers, began to rewrite the formula that has underpinned an American-backed order: The nation in the service of a strongman.

The ecstatic moments of triumph in Tahrir Square seemed to wash away a lifetime of defeats and humiliations, invasions and occupations that, in the weeks before the revolution, had seemed to mark the bitterest time for both Egypt and the Arab world.

"The sun will rise on a more beautiful Egypt," one protester said. Or, as a joke traded by cellphone on Friday put it: "From Tahrir Square to our brothers in fellow countries - is there anyone who has a President bothering them?"

But in the gray light of dawn, Egypt will face the meaning of its revolution, as will an Arab world that shares its demographic of a younger generation taking the stage, posing challenges as myriad as Mr. Mubarak's departure was singular.

The months and years ahead will determine whether the fervor and community of Tahrir Square can translate into a new notion of citizenship, a truce between the state and Islamists and the curbing of the entrenched power of militaries, the police and suffocating bureaucracies that have failed to deliver young people a better life in an Arab world that is becoming ever younger. "It's not the end," said Nadia Magdy, a protester in the square. "It's the beginning."

The beginning was as stunning a moment as the Arab world has witnessed, written in the smallest acts of citizenship and the grandest gestures of defiance. From the first day, Tahrir Square represented a model of people seizing the initiative from a hapless government, be it cleaning the streets or running their own security. The very acts seemed an antidote to decades of autocracy, stagnation and festering resentment over their own powerlessness. "We've discovered ourselves," said one of the organizers, Wael Khalil.

As revelatory was a new form of politics, the protests of the long-derided Arab street, where dutiful crowds were trotted out at the whim of dictators in Syria and Iraq or deployed by the sheer organizational skills of Islamist movements like Lebanon's Hezbollah. Egypt's revolt was by no means spontaneous -- propelled by new media like Facebook and the potency of Al Jazeera's broadcasts -- but the spark of Tunisia's uprising became the flame of Egypt's revolt.

Even the slogan -- "The people want the fall of the regime" -- was borrowed from the Tunisian protests. So was the idea. "Islam is the solution," goes the hackneyed slogan of Islamic activists. Protesters in Cairo offered an alternative: "Tunisia is the solution," and it articulated an indigenous vocabulary, free of the baggage of an American invasion, that put forth resonant calls for an end to corruption, a better standard of living, the respect of rulers and a notion of dignity.

"This is a historic moment in the Arab world: An Arab leader stepping down under the pressure of his people," said Khaled Dakheel, a writer and columnist in Saudi Arabia. "What is happening is telling the people that there is something they can do."

Protesters in Cairo were blunter. One leader had fallen, but some worried about a military that sought to claim the mantle of the revolution even as it remained a bulwark of the old order. Asked what they would do if it imposed its own brand of rule, Ahmed Sleem, an organizer with an opposition group led by Mohamed ElBaradei, a Nobel laureate, said simply, "We know the way to Tahrir Square."

Egypt's revolution earned many names in 18 days: Revolution of the Youth, of the People, of Anger, of Freedom, of the Hungry, and most poetically, the Revolution of Light. In the end, it was called the January 25 Revolution, the date of the first protest. In that, it was a departure from another revolution, that of July 26, when Gamal Abdel Nasser and fellow officers seized power from a decadent king and mobilized Egypt for wars with Israel. It evolved into something far less ambitious: a mantra of security and stability, in which Egyptians and many Arabs were forced to give up their rights.

Even in his very last days, Mr. Mubarak understood the conflict in those terms; in his last speech to the nation, he spoke of security and stability 10 times. The protesters in Cairo wrecked the regional formula, though their ambitions have yet to offer a paradigm to replace it. "Leaders in the Arab world are weaker now," said Sadiq al-Azm, a prominent Syrian thinker and writer.

Whatever order emerges will almost certainly be less favorable to Israel and the United States, both symbols to many protesters of Egyptian subservience. It was no coincidence that the most outspoken proponents of Mr. Mubarak's rule were Israel and Saudi Arabia who, with Egypt, formed the spine of American dominance in the region. Nor will economic reforms of the kind mandated by the International Monetary Fund make headway in a country that blames them for creating a class of crony capitalists.

But a defining trait of Egypt's revolution was the way it looked inward at a country whose stagnation rankled even more than the petty humiliations of the police and the prisons that held thousands without charge. Democracy was the cry on Friday in Tahrir Square, a way to rejuvenation, even as some acknowledged that the unity that created one of the most remarkable tableaus in Egyptian history could splinter as it faces a transition that remained opaque.

"I'm dead scared," said Yasmine Gharabli, a protester in the square, punctuated by cries for civilian, not military government. "I can't believe the power of the people but we have to work so hard now and make sure it goes the way we want it to go."

Egypt's military struck the right note in its communiqués. A spokesman even raised his hand in salute as he praised the youths killed in the revolution. But like the bureaucracy, utterly incapable of meeting the demands of a city of 18 million, the military remains an entrenched institution, itself a symbol of the array of interests -- from tribes in Jordan, a ruling minority in Syria and ruling families in the gulf -- that may offer up some reform, as Bahrain and Yemen's leaders have, to defuse radical change.

"Those who are wise among the Arab regimes would introduce serious and quick reforms right away before uprisings and revolutions sweep them away," said Najeeb Rajab, a prominent human rights activist in Bahrain.

Few believe that the revolution will represent the kind of moment that Eastern Europe experienced in 1989. The Arab world, ruled by monarchies, republics and something in between, has too many different ideologies and disparate histories. Of all Arab countries, Tunisia and Egypt have the strongest sense of national identity, a cohesiveness that helped their revolutions coalesce so quickly. Neither had a military that would brutally crush dissent (as in Syria), or the ability to play off populations against each other (as in Jordan) or even the money to pay people to stay quiet (as in the gulf).

It does have the Muslim Brotherhood, though, and the way Egypt's transition brings the Islamic group formally into politics for the first time in nearly 60 years may chart a way forward for states that have long used the threat of Islamists to forestall democratic reform. Its role remains a pressing question so far unanswered in the Middle East: How to reconcile individual rights with religious identity in devout countries.

There are few examples of success in the Arab world. Nominally democratic places like Iraq and Lebanon are beholden to sectarian allegiances so visceral they promote toxic divisions. These past weeks, Egypt defied those narrower identities, bringing Islamic activists into the arena with the most secular. Many said their work together helped dispel clichés about each other. But protests rallying around one demand pale before the task of building a state. Some have looked to Turkey, a Muslim country that many Islamic activists consider a success in bringing religiously inspired parties into the political mainstream.

"I think the most important challenge for Egypt the next few years is how to build a new civil culture," said Hanna Grace, an opposition leader. "Not military, not religious, but a civil culture. How do you build a secular modern state for religious people?"

Perhaps the most lasting legacy of Egypt's revolution, though, will prove its most intangible: a sense of pride. After the 1967 war, Nizar Qabbani, a renowned Arab poet, wrote, "Our shouting is louder than our actions, our swords are taller than us. This is our tragedy." On Friday night in Tahrir Square, the song of a contemporary, the Egyptian icon Abdel-Halim Hafez, blared from the speakers. Everyone nearby shouted the chorus.

Promoted
Listen to the latest songs, only on JioSaavn.com
"You rose up, oh Egypt. And after patience and the night came victory," it went. "Egypt, you rose up, and your son succeeded and he waved your flag high."