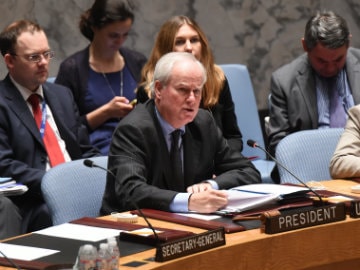 The UN Security Council on Wednesday expressed "grave concern" at the resumption of hostilities in Gaza between Israel and Palestinians and called upon the parties to resume negotiations to urgently reach a "sustainable and lasting ceasefire."

The 15-member Security Council also "called upon the parties to prevent the situation from escalating and to reach an immediate humanitarian ceasefire," said British UN Ambassador Mark Lyall Grant, president of the council for August.

Promoted
Listen to the latest songs, only on JioSaavn.com
Hostilities resumed on Tuesday, shattering a 10-day period of calm, which had been the longest break from fighting since Israel launched its Gaza offensive on July 8 in a bid to end rocket fire into its territory.