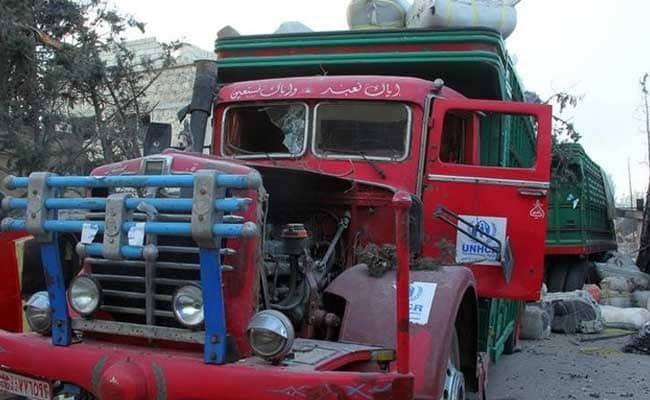 A damaged truck is pictured after an airstrike on the rebel held Urm al-Kubra town. (Reuters)

GENEVA: The UN said Tuesday it had suspended all humanitarian aid convoys in Syria after a deadly air raid hit trucks delivering aid near Aleppo, killing a Red Crescent staff member and civilians.

As an "immediate security measure, other convoy movements in Syria have been suspended," Jens Laerke, spokesman for the UN humanitarian agency told reporters in Geneva.

This marks a "very, very dark day for humanitarians in Syria and indeed across the world," he said, stressing that it was "paramount that we are able to establish the facts through an independent investigation."

The UN said at least 18 trucks in the 31-vehicle convoy were destroyed late Monday en route to deliver humanitarian assistance to the hard-to-reach town of Orum al-Kubra.

The Syrian Observatory for Human Rights said 12 Red Crescent volunteers and drivers had died in the strike.

Red Cross spokesman Benoit Carpentier told reporters that the director of the Syrian Red Crescent's sub-branch was killed, along with a number of civilians.

Promoted
Listen to the latest songs, only on JioSaavn.com
Laerke said the convoy had been carrying food and non-food aid for some 78,000 people.

The aid was "intended for people in dire need... This aid will now not reach those people," he said, stressing that attacks on humanitarian workers has "an exponential effect on thousands of other people."