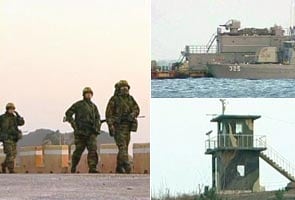 Seoul: The UN Security Council will hold an emergency meeting on Sunday to try and defuse the growing tension between North and South Korea. The meeting comes amid heightened tension between the two Koreas.

North Korea said on Saturday that the situation on the Korean peninsula would "explode" if South Korea went ahead with a planned live-drill artillery exercise on a border island.

The North rained a deadly bombardment on Yeonpyeong island after a similar drill last month. It has threatened a deadlier attack if the one-day drill scheduled sometime between December 18 and 21 goes ahead.

The Korean People's Army said in a statement relayed by the North's state media that its response this time "will be deadlier than what was made on November 23 in terms of the powerfulness and sphere of the strike."

A foreign ministry statement, quoted by the official news agency, accused US troops of providing a "human shield" for the upcoming drill but repeated threats to attack it.

Some 20 US soldiers are to provide back-up assistance to South Korean marines during the exercise.

Pyongyang disputes the Yellow Sea border drawn after the 1950-53 war and claims the waters around Yeonpyeong and other South Korean frontline islands as its own maritime territory.

It says the last drill, on November 23, dropped shells into its waters.

Hours later that day, the North's bombardment killed two marines and two civilians on Yeonpyeong and damaged dozens of homes.

"If the South Koreans dare to carry out the live-fire drill and cross the line, the situation in the Korean peninsula will explode and a disastrous outcome cannot be avoided," the statement said.

"We have already declared that we will punish mercilessly without hesitation provokers who invade our sovereignty and territory. Our military does not speak empty words."

Officials in the US, Russia and at the United Nations expressed concern that the situation on the Korean peninsula could escalate out of control.

The North accused the United States of stirring up South Korea to stage a provocative act.

It said the plan for the drill was reached during a visit to Seoul by a US Joint Chiefs of Staff official -- an apparent reference to Admiral Mike Mullen, the JCS chief.

The North said the US defence department "has threatened us not to forget that Americans and foreign correspondents are at the site of the drill. America is providing the human shields.

Promoted
Listen to the latest songs, only on JioSaavn.com
"This shows America will not hesitate to bring one country's peace and stability into chaos," the foreign ministry statement said.

"We will deal and calculate with America accurately on all extreme incidents and consequences on the Korean peninsula," it added, without elaborating. (With AFP Inputs)