Russia Ukraine war: Russian forces crossed the Ukrainian border on Thursday, and launched an attack. They are now close to capital Kyiv. 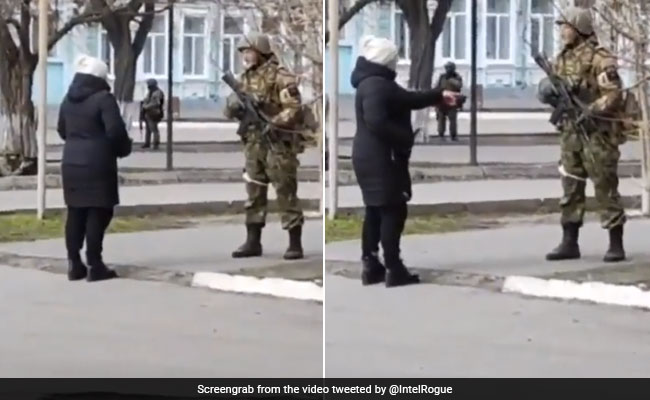 As Russian soldiers crossed Ukraine's border and entered the streets, Ukrainians launched widespread protests across the world to denounce the invasion. From Tokyo to New York, protests have been organized outside Russian embassies and public squares.

But on social media, a Ukrainian woman confronting the Russian soldiers has gone viral. Hailed as “fearless”, many on Twitter and other social media platforms have posted a video of the woman standing up to heavily-armed Russian soldiers demanding to know what they are doing in her country.

Woman in Henichesk confronts Russian military. “Why the fuck did you come here ? No one wants you!” 🤣#Russia#Ukraine#Putinpic.twitter.com/wTz9D9U6jQ

In the short clip, the woman first asks the soldiers: “Who are you?” The soldiers respond, “We have exercises here. Please go this way.”

When she gets to know that they are Russian soldiers, the woman in the port city of Henichesk says, “So what the f*** are you doing here?"

The soldiers, with large machine guns and a handgun, try to calm the woman saying, “Our discussion will lead to nothing.” But the woman doesn't appear to be fearful and instead says, “You're occupants, you're fascists! What the f*** are you doing on our land with all these guns? Take these seeds and put them in your pockets, so at least sunflowers will grow when you all lie down here."

Sunflower is the national flower of Ukraine.

The video was shot by people passing by, and the act garnered praise from social media users.

“They should ask her to speak to the troops, she'll have them ready in no time to defend our land,” said another user.

Henichesk is just 18 miles from Crimea, which was annexed by Russia in 2014.

"The bravery is amazing! Thank you! We stand with you!" a Twitter use wrote praising the woman.

The video comes as Russian forces advance and Ukraine's President Volodymyr Zelenskiy pleaded with the international community to do more, saying sanctions announced so far were not enough.

The Russian forces have now reached areas just outside Kyiv. So far, 137 people have been killed in the invasion that began more than 24 hours ago.