Earlier this week, Ukrainian officials revealed death and destruction in Bucha, another city near the capital. 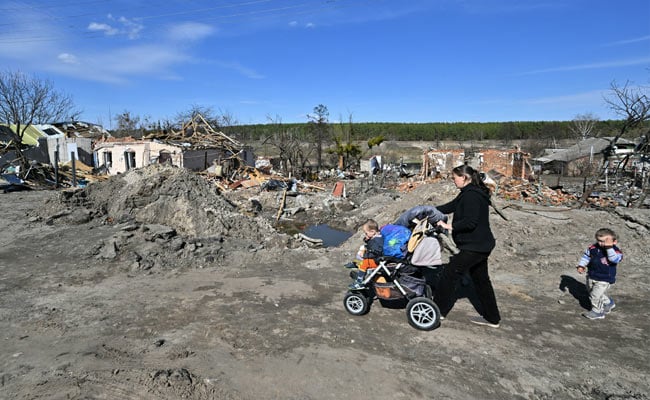 A woman and her sons walk next to a shell crater in the outskirts of Ivankiv. AFP

A Ukrainian official broke down as she narrated the trauma the people of her town had to endure during a 35-day occupation by invading Russian forces. The official, deputy mayor of Ivankiv Maryna Beschastna, claimed during an interview that two sisters aged 15 and 16 were raped by Russian soldiers.

"There was a case in one village, two sister were raped... girls of 15 and 16... children. Women were pulled by their hair out of their basements, so that they could abuse them," Ms Beschastna told ITV News.

She added that young girls in Ukraine started cutting their hair to appear "less attractive" and avoid getting raped by the Russians.

The reported rapes happened when Russian troops occupied the Kyiv suburb, which has now been reconnected with the rest of the country, thanks to a new pontoon bridge built by the Ukrainian army to replace the one that was destroyed, ITV said.

Some Ivankiv residents too shared their trauma during the month-long occupation.

Among them was a Ukrainian woman who recounted how she desperately tried to save her 12-year-old son who was fatally struck by shrapnel.

The woman, Elena Skoropad, said she and her husband, Sasha, rushed their son Artem to a hospital after a cluster ammunition exploded.

"On the way here in the car Artem was shouting all the way 'Mommy, Sasha, I love you'," Ms Skoropad told ITV.

"These were his words, then he kept saying his legs were hurting, his back was hurting. When we brought him [to the hospital] he was still alive, but then the injuries were incompatible with life," she added.

The schoolboy was a keen basketball player, said Artem's mother.

Earlier this week, Ukrainian officials revealed death and destruction in Bucha, another city near the capital. Russian troops withdrew from the Kyiv region about a week ago to regroup in the east, leaving scenes of death and horror in commuter towns around the capital.

Mr Zelensky challenged the United Nations to "act immediately" or "dissolve yourself altogether" during an address in which he showed harrowing footage of dead bodies - including children - he said were victims of Russian atrocities.

On Thursday, he described the situation in Borodianka, another town near Kyiv. "It's much more horrific there, there are even more victims of Russian occupiers."

Ukraine has accused the Russians of executing hundreds of peaceful civilians during their occupation of these cities. The bodies of some of these citizens were discovered with their hands tied behind their backs.