Kharkiv, which is under Ukrainian government control, is home to tank, aircraft and tractor factories and lies 40 km (25 miles) from the Russian border. 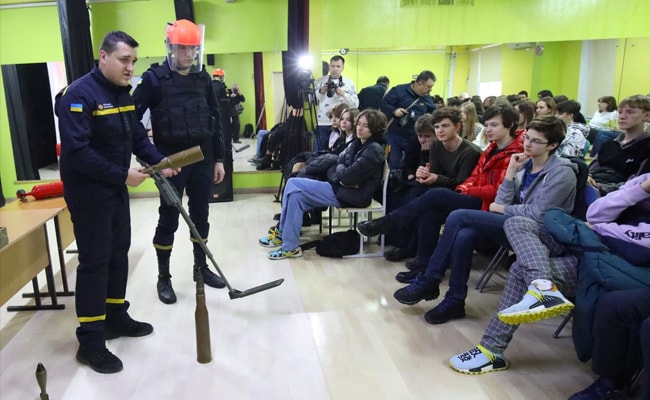 Students in the eastern city of Kharkiv are learning about bulletproof vests and explosives as well as practising evacuation drills and first aid as Ukraine prepares for a possible big assault by the Russian military.

The city, which is under Ukrainian government control, is home to tank, aircraft and tractor factories and lies 40 km (25 miles) from the Russian border.

It has been identified by President Volodymyr Zelenskiy as a possible Russian target, though his spokesman said he was speaking hypothetically.

Russia has denied it plans to invade Ukraine but the authorities are taking no chances, especially with the stakes now higher after Moscow's recognition of two separatist regions in the former Soviet republic's east.

"We have started giving those drills for children more often to prevent situations such as children getting injured, or, God forbid, death," civilian defence specialist Oleksandr Shevchuk said.

"We ... let them try on our uniforms, bulletproof vests and helmets. Show them what explosive items can be, so that they can become aware of situations that may happen to them."

Student Nazar said: "This is quite relevant, given the situation that is generally developing between Ukraine and Russia. Yes, scary, very scary."