The announcement came on the eve of an extraordinary session of parliament on Wednesday, where MPs recalled from holiday will discuss the collapse of the Afghan government, so soon after the withdrawal of Western forces. 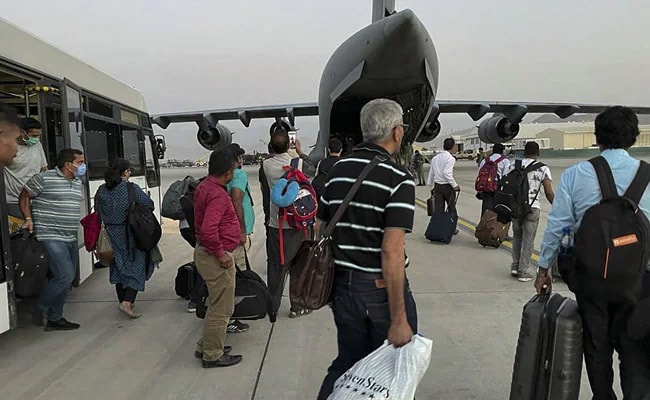 Britain was one of the US' staunchest allies in president George W. Bush's "war on terror" (File)

Britain on Tuesday announced a resettlement scheme for Afghans fleeing the Taliban after their return to power, offering an initial 5,000 places in the first year, rising to up to 20,000 in the long term.

The announcement came on the eve of an extraordinary session of parliament on Wednesday, where MPs recalled from holiday will discuss the collapse of the Afghan government, so soon after the withdrawal of Western forces.

Some 900 British troops have been sent back to the Afghan capital to help repatriate thousands of UK nationals, including embassy staff, following the Islamists' return.

London said priority would be given to those most at risk, including Afghan women, children and others forced to flee or facing threats and persecution from the hardliners, offering them a chance to remain in Britain indefinitely.

"This resettlement scheme will be kept under further review for future years, with up to a total of 20,000 in the long term," the Home Office said in a statement.

The scheme is modelled on that which resettled 20,000 refugees from the Syria conflict from 2014 to this year.

Britain was one of the United States' staunchest allies in president George W. Bush's "war on terror", launched after the September 11, 2001 attacks on New York and Washington.

In the restive southern Afghan province of Helmand, Britain had 9,500 personnel and 137 bases alone. And its involvement came at a cost, with more than 450 troops killed.

But senior politicians and military top brass have condemned the peace deal brokered by US former president Donald Trump that led to the withdrawal of US-led forces, and gave the Taliban the opportunity to return, virtually unopposed.

The government said it was working with foreign allies, including in the "Five Eyes" intelligence partnership with the United States, Canada, Australia and New Zealand, to identify those most at risk, even as Taliban leaders promised an amnesty and vowed not to take revenge.

"We owe a debt of gratitude to all those who have worked with us to make Afghanistan a better place over the last 20 years," he said.

"Many of them, particularly women, are now in urgent need of our help."

"Our country has a proud history of offering sanctuary to those in need. We will not abandon people who have been forced to flee their homes and are now living in terror of what might come next," she said.

Britain has come under fire for cutting its foreign aid budget and tightening immigration rules after its exit from the European Union, including for migrants -- many of them from conflict hot spots -- crossing the Channel from France.

It has also faced pressure to do more to help resettle Afghan interpreters who helped the military after the Taliban was ousted in late 2001.

The latest announcement is separate from that scheme, which expects to relocate 5,000 former staff and their families by the end of this year: 2,000 have already arrived.

Since Saturday, the eve of the Taliban's capture of Kabul, 520 British nationals, diplomats and former Afghan staff have left Afghanistan on military flights, the Home Office said.