UK Police Yet To Confirm Identity Of 39 Found Dead In Truck: China

In Britain's largest murder probe in more than a decade, the local police force have arrested the truck's driver on suspicion of murder. 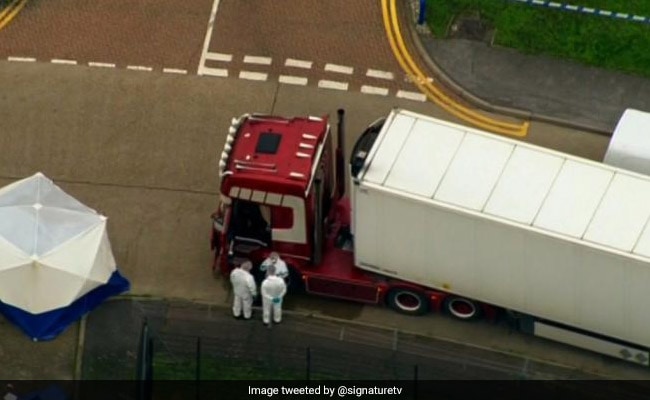 UK police said of the 39 found dead in the truck, eight were women and thirty-one were men

British police have yet to confirm that the 39 people found dead in a truck near London were Chinese nationals, the Chinese foreign ministry said Friday.

A Chinese consular official travelled to Essex on Thursday, a day after emergency workers discovered the bodies inside the refrigerated container of a vehicle parked in an industrial area.

Police in the UK have said "all are believed to be Chinese nationals". The truck had arrived on a ferry from Belgium.

"British police said they were verifying the identity of the victims and could not confirm whether they were Chinese," the Chinese foreign ministry said in a statement.

The Chinese consular official, Tong Xuejun, told state broadcaster CCTV on Thursday that he had met with British police.

"We will urge the British police to further find out the truth. We will keep the media informed... of the latest progress of the incident," Tong said.

The local police force, who have arrested the truck's driver on suspicion of murder, said eight of the dead were women and 31 were men.

It is Britain's largest murder probe in more than a decade.

The deaths echoed the discovery of 58 Chinese immigrants hidden in a Dutch truck in the English port of Dover in 2000. Only two had survived.

(Except for the headline, this story has not been edited by NDTV staff and is published from a syndicated feed.)
Comments
London Truckbodies found in truckChinese foreign ministry