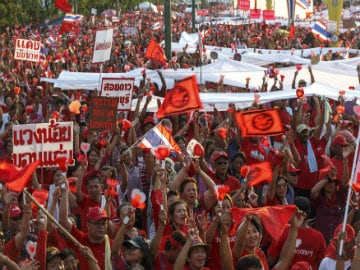 Members of the pro-government "red shirt" group cheer during a rally in Nakhon Pathom province on the outskirts of Bangkok, May 10, 2014

Bangkok: Two people were killed and 21 were wounded in an attack early Thursday on an anti-government protest camp in Bangkok, medical officials and police told AFP, taking the death toll during six months of rallies to 27.

Promoted
Listen to the latest songs, only on JioSaavn.com
"Two people were killed and 21 were wounded," the city's Erawan Emergency Centre said on its website, in a toll later confirmed by police.