Defence Minister Itsunori Onodera confirmed the crash in the town of Kanzaki and said the two crew on board were retrieved "in a state of cardiac and respiratory arrest," Jiji news agency reported. 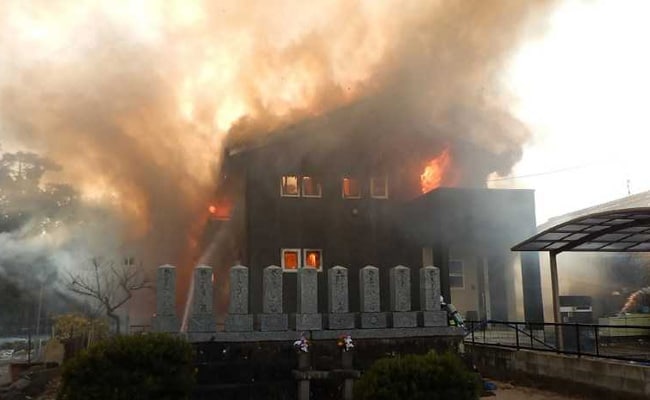 Tokyo, Japan: Two crew were feared dead Monday after a Japanese military helicopter crashed in a residential area in the southwest of the country, setting a home on fire.

Defence Minister Itsunori Onodera confirmed the crash in the town of Kanzaki and said the two crew on board were retrieved "in a state of cardiac and respiratory arrest," Jiji news agency reported.

The language is often used by Japanese officials before deaths are officially confirmed.

Japan's NHK television showed a thick plume of grey smoke rising from the site of the crash in between the rooftops of local houses.

Local firefighters could be seen running through the streets with red fire-hoses as people were evacuated from the area.

"I heard something like a rumbling of the earth," a woman living near the crash site told NHK.

"I rushed out there and saw a blaze and black smoke. It's impossible that this happens in such a place."

Onodera earlier told reporters the AH-64 Apache attack helicopter had gone down in Japan's Saga region and "burst into flames."

Local officials confirmed the crash site was a residential area, adding one home had caught fire. The local fire authority said it had dispatched 14 fire engines and three ambulances to the site.

Local media reported that no one was inside the home at the time of the crash.

The incident raised memories of a 2016 crash in which a Japanese air force jet with six people aboard went missing in mountainous terrain.

There has also been a string of accidents involving US military helicopters that have fuelled opposition to their presence in the country.

The latest was a UH-1 helicopter that was forced into an emergency landing last month on the southern Japanese island of Okinawa.

No one was hurt in that incident, which officials blamed on a faulty rotor blade.

Japan's Self-Defence Forces (SDF) have been banned from waging any kind of combat beyond defence of the nation since the US-imposed constitution of 1947 that followed the carnage of World War II.

They have been deployed overseas in peacekeeping missions, some of which have proved controversial at home.

And while the SDF is strictly limited in terms of the scope of its military activity, Japan nonetheless boasts an impressive array of weaponry with highly trained personnel.