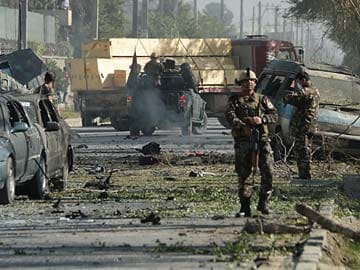 Afghan security forces keep watch at the site of a suicide attack in Kabul on September 16, 2014. (Agence France-Presse)

Washington: Two Americans were among those killed in a Taliban suicide bombing on Tuesday that targeted a NATO convoy in Kabul, a US defense official told AFP.

The official, who spoke on condition of anonymity, did not specify if the American victims were soldiers or civilians.

The NATO-led coalition had earlier issued a statement saying three personnel died in the attack, and the Polish army said one of its soldiers was killed.
Comments
Taliban suicide bombing