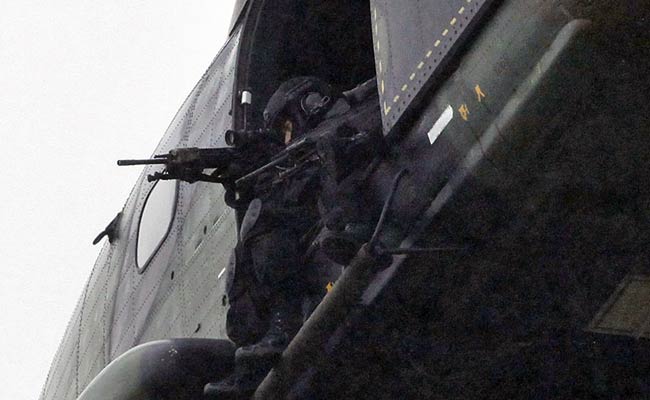 Snipers were deployed on roofs and helicopters swooped low over a small printing business in the town of Dammartin-en-Goele, only 12 kilometres (seven miles) from Paris's main Charles de Gaulle airport.

And in the east of the French capital, a man already suspected of gunning down a policewoman on Thursday was thought to be behind a new attack on the kosher grocery store, with at least five hostages taken and at least one injured.

The Porte de Vincennes area in eastern Paris was locked down with people told to stay indoors and police streaming into the streets.
Police sources said there was a "connection" between this gunman and the brothers accused of carrying out France's bloodiest massacre in half a century at the Charlie Hebdo offices.

The massive manhunt for the two brothers, Cherif and Said Kouachi, appeared to be approaching a dramatic climax as security forces laid siege to the CDT printing business in Dammartin-en-Goele.
Ahead of the stand-off, police had already exchanged fire with the pair in a high-speed car chase. Prosecutors told AFP there had been "no casualties reported" in the immediate aftermath of the shoot-out.

One witness described coming face-to-face at the printer's with one of the suspects, dressed in black, wearing a bullet-proof vest and carrying what looked like a Kalashnikov.

Schools nearby Dammartin-en-Goele were evacuated and residents barricaded themselves indoors as the hostage drama unfolded.
One 60-year-old choked back tears as she said how elite forces burst into the shop where her daughter works and ordered them to take cover.

Promoted
Listen to the latest songs, only on JioSaavn.com
"My daughter told me: 'Don't be scared mummy, we're well protected. She was calm but me, I'm scared. I'm really scared," said the woman.

Prior to the standoff, the suspects had hijacked a Peugeot 206 nearby from a woman who said she recognised them as the brothers, , accused of killing 12 people in Wednesday's attack on Charlie Hebdo, which repeatedly lampooned the Prophet Mohammed.