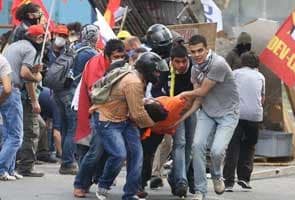 "Dictator, resign!... We will resist until we win," yelled the crowds, in the latest of a string of protests that have by some accounts left hundreds injured.

Police had withdrawn on Saturday from Istanbul's main Taksim Square, the symbolic heart of demonstrations that started over an unpopular building project nearby and boiled over into a general protest against the government.

Crowds of whistling, flag-waving protestors continued to cover Taksim Square but the flashpoint shifted late Sunday to the area near Erdogan's nearby Istanbul base.

Interior Minister Muammer Guler said earlier that more than 1,700 people had been arrested in the unrest nationwide, though most have since been released.

He said 58 civilians and 115 security officers had been injured over several days of protests, although rights groups have put the number of injured higher.

A doctors' union in Ankara said more than 400 civilians had been injured there including some with serious head wounds.

Rights groups have complained about what Amnesty International described as a "disgraceful" heavy-handed response by police to the demonstrations.

The unrest began as a local outcry against plans to redevelop Gezi Park, a rare green spot near Taksim, but after a heavy-handed police response it quickly snowballed.

Accused by critics of pushing an increasingly conservative and authoritarian agenda, Erdogan's government is facing the biggest protests since it took power in 2002.

Erdogan on Sunday renewed his call for an end to the disturbances.

"If you love this country, if you love Istanbul, do not fall for these games," he said in televised comments.

Foreign Minister Ahmet Davutoglu warned in a Twitter message: "The continuation of these protests... will bring no benefits but will harm the reputation of our country which is admired both in the region and the world."

Guler estimated the cost at more than 20 million liras (around Rs 56 crore).

The prime minister had insisted on Saturday that his government would press ahead with the park redevelopment, although he said it may not include a shopping mall, as protesters fear.

He also admitted "some mistakes" in the police response and called off the police from Taksim on Saturday after an outcry.

He confirmed on Sunday however a plan to build a mosque on Taksim Square - a sensitive move as he faces growing accusations of trying to impose an Islamic agenda.

Amnesty International said some protesters had been left blinded by the massive quantities of tear gas and pepper spray used by police.

Human Rights Watch said the number of injured was higher than official figures suggested and that one protester had lost an eye after police shot him with a plastic bullet.

Turkey's NATO allies Britain, France and the United States have all urged the Erdogan government to exercise restraint.

They were joined Sunday by the European Union. The EU's foreign policy chief Catherine Ashton released a statement condemning the "disproportionate use of force" used by Turkish police.

"Dialogue should be opened to find a peaceful solution to this issue," she said.

Turkey's southeastern neighbour Iraq on Sunday warned of the implications for the region.

"We are worried about the security fallout of the situation in Turkey," said Prime Minister Nuri al-Maliki in an emailed statement.

"Adopting violence will cause it to spread, which will affect the situation in the region. We call for restraint and for avoiding violence."

A controversial new law introduced by his ruling Justice and Development Party aims to restrict the sale and advertising of alcohol.

"It's not about the Gezi Park project anymore. It has become a movement against the government which is interfering more and more in our private life," said Hamdi, a protestor in Ankara who would not give his family name.

The government has also been criticised for its crackdown on opponents including Kurds, journalists and the military establishment.

Promoted
Listen to the latest songs, only on JioSaavn.com
"They call me a dictator," Erdogan said in a speech on Sunday. "If they liken a humble servant to a dictator, then I am at a loss for words."