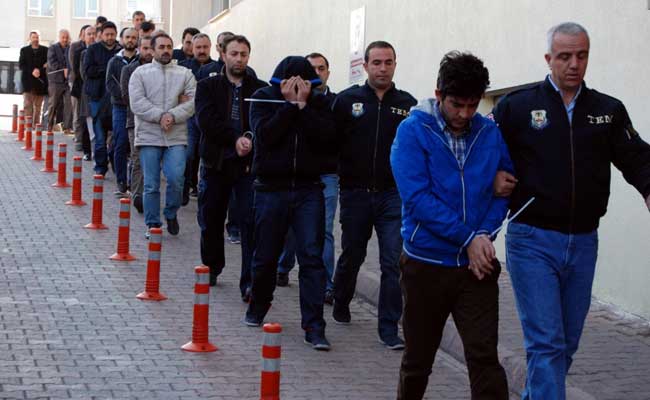 Istanbul: Turkey on Wednesday detained more than 1,000 alleged supporters of US-based Muslim cleric Fethullah Gulen, the biggest crackdown since President Recep Tayyip Erdogan's victory in a referendum on ramping up his powers.

The dawn raids across the country to seek a total of over 3,000 suspects came just a week after Erdogan narrowly won public blessing for controversial changes to the constitution to create a presidential system.

They are the latest indication Turkey intends no let-up in the fight against its perceived enemies after the referendum, with fighter jets Tuesday pounding Kurdish militant targets in Iraq and northern Syria.

A total of 1,013 suspects have so far been detained in raids in all of Turkey's 81 provinces, the official Anadolu news agency said.

Turkish authorities blame Gulen for masterminding the July 2016 failed military coup that aimed to oust Erdogan from power but he denies the charges.

About 8,500 police officers were involved in the nationwide operation, Anadolu reported, adding that arrest warrants had been issued for 390 suspects in Istanbul alone.

Indicating that the numbers detained were set to rise, Interior Minister Suleyman Soylu said the raids were continuing.

"It is an important step for the Turkish Republic," he added.

The 'Yes' camp won 51.41 percent of the vote in the April 16 referendum but opponents claim the result would have been reversed in a fair poll.

Analysts have said that following the poll Erdogan faces a choice between confrontation and reconciliation with the nation deeply divided.

Turkey accuses the Hizmet (Service) movement Gulen leads of being a "terror organisation" although the group insists it is a peaceful organisation promoting moderate Islam.

The government has repeatedly asked the United States to extradite Gulen, who has been living in exile there since 1999.

About 47,000 people have already been arrested in Turkey under a nine-month state of emergency in place since the coup bid, a crackdown whose magnitude has raised alarm in the West.

The Turkish parliament just ahead of the referendum extended the state of emergency by another three months to July 19.

The Hurriyet newspaper reported that arrest warrants had been issued against a total of 7,000 suspects across Turkey, citing unidentified sources.

It said the simultaneous raids were carried out in cooperation between police and the National Intelligence Organisation (MIT).

The suspects are so-called "secret imams" of Gulen suspected of infiltrating themselves into the police or other state institutions, it reported.

Erdogan has repeatedly said he will wipe out the "virus" of Gulen from state institutions after the failed coup.

The vast operation targeted big cities such as Istanbul as well as Izmir in western Turkey and Konya in the Anatolian heartland.

Prime Minister Binali Yildirim had hinted in a television interview this month that a new anti-Gulen crackdown has been in the pipeline.

"The network of its relationships has not been solved so far," he said, adding that new evidence would provide the government with the opportunity in the fight against what Ankara calls "FETO" (Fethullah Terror Organisation).

"Things will take a different course. The details will be clear in the coming days."

Analysts have said Erdogan after the poll can choose between new confrontation or reconciliation with the West but in recent days tensions have risen further.

Ankara said it had carried out the strikes against "terrorist havens", vowing to continue acting against groups it links to the outlawed Kurdistan Workers' Party (PKK).

In northeast Syria, strikes targeted the Kurdish People's Protection Units (YPG) -- who are leading the offensive against the Islamic State stronghold Raqa.

The US State Department said it was "deeply concerned" the strikes were conducted "without proper coordination either with the United States or the broader global coalition" against IS.

Promoted
Listen to the latest songs, only on JioSaavn.com
The Parliamentary Assembly of the Council of Europe (PACE) voted Tuesday to reopen a monitoring probe into Turkey over rights concerns, sparking anger from Ankara.