Tulsi Gabbard Says Will Not Run As An Independent Presidential Candidate

Ms Gabbard, who is the first Hindu woman to be elected to the US Congress even though she is of Samoan descent, had failed to qualify for the next Democratic debate 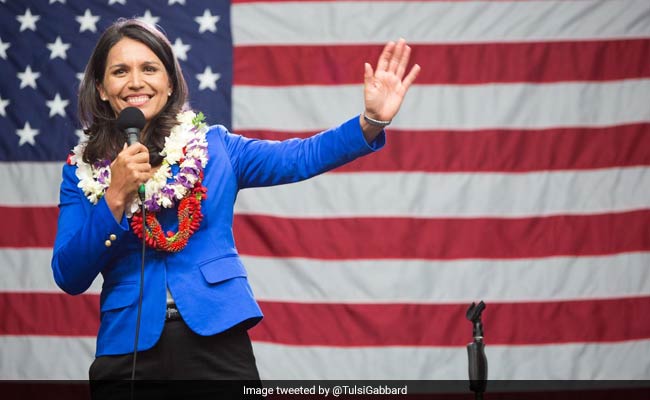 Tulsi Gabbard had failed to qualify for the next Democratic debate

Tulsi Gabbard, the first Hindu lawmaker in the US Congress to run for the presidential post, has ruled out contesting as an independent candidate if she fails to win the Democratic presidential nomination.

"I will not. No, I have ruled that out," she told CNN on Thursday when asked if she plans to contest elections as an independent.

"I'm going to continue to focus on moving our campaign forward, continuing this grassroots campaign, continuing to deliver our message to the American people and ask for their support," she added.

Ms Gabbard, who is the first Hindu woman to be elected to the US Congress even though she is of Samoan descent, had failed to qualify for the next Democratic debate after making the first two debates.

The 38-year-old lawmaker has been serving as the US Representative for Hawaii's second congressional district since 2013.

Ms Gabbard claimed that there is "no explanation or transparency around why certain polls are qualifying while other very credible recognised polls are somehow not qualifying".

"Frankly, the Democratic National Committee (DNC) has not provided any transparency to voters about how they're making these decisions," she told the network.

Earlier this year, she had announced her decision to run for the presidency in the 2020 elections.

Ms Gabbard served in a field medical unit of the Hawaii Army National Guard in a combat zone in Iraq from 2004 to 2005 and was deployed to Kuwait from 2008 to 2009.

She was also the DNC's vice chair from 2013 to 2016, but resigned to endorse Senator Bernie Sanders during the 2016 Democratic presidential nomination.