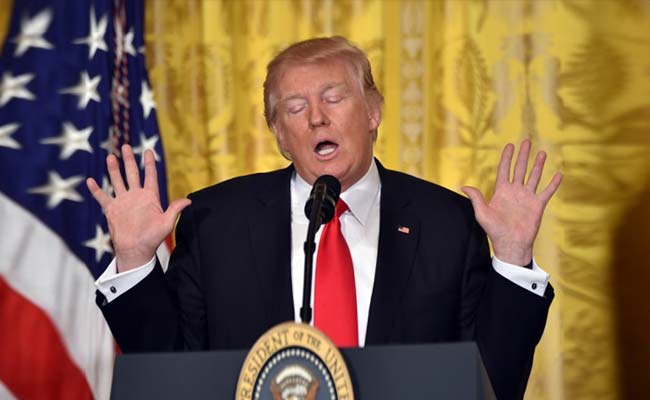 The Trump administration announced that it won't disclose the names of visitors to the White House.

Washington: The Trump administration announced Friday that it would not follow President Barack Obama's policy of voluntarily disclosing the names of most visitors to the White House complex, citing "grave national security risks and privacy concerns."

The announcement, from an administration that has faced pointed questions about its commitment to transparency, marks a significant shift from the Obama White House, which released the names of nearly 6 million visitors, including scores of lobbyists.

Instead, President Donald Trump administration said it would release information under far more limited circumstances: When Freedom of Information Act requests are filed for those visiting offices of the White House classified under the law as separate agencies, such as the Office of Management and Budget.

Under the new policy, it will be up to the White House to decide whether to release the names of visitors coming to meet with the president, vice president and their senior staff, at least in the short term. Under a separate statute, much of that information can become public years after Trump leaves office.


Friday's announcement was harshly criticized by an array of government watchdog groups.

"The only excuse for this policy is that the Trump administration has something to hide," said David Donnelly, president and chief executive of Every Voice. "This kind of secrecy will allow big donors, lobbyists and special interests to have unknown levels of influence in the White House."

"It's the exact opposite of 'draining the swamp,' " Donnelly added, referring to Trump's pledge to usher in a more ethical and less corrupt era in Washington.

The Trump administration was sued in federal court earlier this week by a coalition of watchdog groups to compel the release of the White House visitor logs. Under Obama, such records, which were published on a White House-maintained Web page, were typically disclosed 90 to 120 days after the visit.

Since Trump took office in January, the page where the visitor logs had been publicly available has gone dark, and Trump administration officials said Friday that they will no longer maintain it, which the White House said would save taxpayers $70,000 by 2020.

After initial resistance, Obama's policy was crafted in 2009 in response to earlier lawsuits by Citizens for Responsibility and Ethics in Washington, one of the groups now part of the new lawsuit against Trump.

The policy permitted some exceptions to disclosure, including private visits to the Obama family. The Obama White House also maintained the prerogative not to release records of particularly "sensitive" meetings, such as interviews with potential Supreme Court nominees.

Obama at times drew criticism for such carve-outs, as well as for other ways for skirting the agreement, including meetings between White House officials and lobbyists at a coffee shop near the White House that didn't show up in the logs.

Trump aides highlighted such loopholes under Obama and said the new policy is consistent with a legal distinction that Obama officials drew in a 2012 lawsuit. Despite the voluntary disclosure of visitor logs, the Obama administration maintained that the logs were White House records and therefore not required to be disclosed under the Freedom of Information Act.

Others have argued that the records are subject to disclosure under the FOIA because they are created by the Secret Service, which is an agency covered by the law.

As a private citizen, Trump was highly critical of the Obama administration's position in 2012, writing on Twitter: "Why is @BarackObama spending millions to try and hide his records? He is the least transparent President - ever - and he ran on transparency."

The existence of the visitor logs burst back into the news last month when House Intelligence Committee Chairman Devin Nunes, R-Calif., went to the White House grounds to review intelligence reports on which he later briefed the president. Both Nunes and White House officials initially declined to say whom Nunes had visited and who had cleared him onto the grounds, information that is typically contained in the logs, along with the length of the stay.

White House communications director Mike Dubke said Friday that the Trump administration has taken several steps to ensure the government "is both ethical and accessible to the American people." Among those he mentioned were new restrictions on lobbyists and allowing journalists to participate remotely in White House briefings via Skype.

"Given the grave national security risks and privacy concerns of the hundreds of thousands of visitors annually, the White House Office will disclose Secret Service logs as outlined under the Freedom of Information Act, a position the Obama White House successfully defended in federal court," Dubke said in a statement, referring to the 2102 lawsuit filed by Judicial Watch, a conservative organization.

Judicial Watch was among the organizations critical of Trump on Friday.

"This new secrecy policy undermines the rule of law and suggests this White House doesn't want to be accountable to the American people," the group's president, Tom Fitton, said in a statement.

With the new policy, the White House officials made clear Friday that they believe Trump is under no legal obligation to disclose visitors to the complex. As a matter of practice, the White House has disclosed the names of many of those who meet directly with the president on the days the meetings take place. There has been very little disclosure of meetings with staff.

Some past and present government officials have argued that White House officials should be permitted to conduct meetings outside the public eye as a matter of policy.

"I tend to feel it's the prerogative of the White House to have people come visit, and the public doesn't need to know who they are," Andrew Card Jr., chief of staff under President George W. Bush, said in an interview last week. "We don't have a log on everybody who visits Congress, and they're a coequal branch of government."

Christina Reynolds, who served as director of media affairs under Obama, said Trump had made "the wrong call" but that it was somewhat understandable why he made the call he did. Despite being the first to open up the logs, the Obama administration was criticized for not going far enough and endured negative news stories about some of its visitors.

"If your only guide is whether you're going to get bad stories, it's more understandable," Reynolds said, saying that the Trump White House may have decided to "take its lumps" Friday but be spared criticism based on what would later be disclosed in the logs.

In its criticism of Trump on Friday, American Civil Liberties Union, whose political director, Faiz Shakir, noted the timing of the announcement heading into Easter weekend.

"Elected officials work for the people and we deserve to see government business conducted in transparent daylight," Shakir said. "This 'Good Friday' news dump is simply the latest in a series of efforts by President Trump to avoid public accountability, and it's not the way to improve the people's declining trust in this administration."

Clear We Have Entered Recession That Will Be Worse Than 2009: IMF Chief