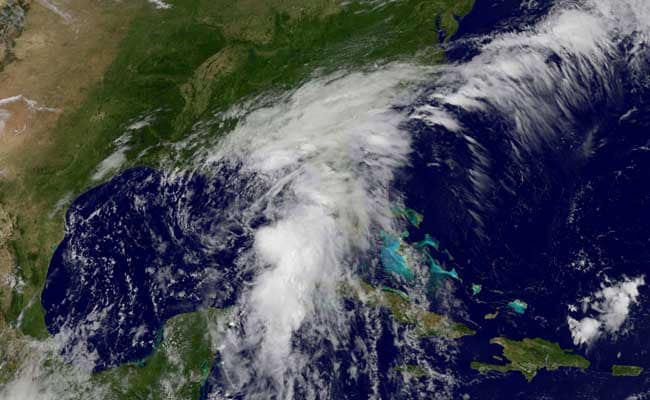 Tropical Storm Colin over Florida and the US South-East coast in this satellite image released. (Courtesy GOES Project Science/NASA/Reuters)

Colin, which formed Sunday in the Gulf of Mexico, is expected to cross the southern state with top sustained winds of 50 miles (85 kilometers) per hour, the National Hurricane Center (NHC) said Monday.

The storm could dump 3-6 inches (7.6-15.2 centimeters) of rain or more in isolated areas, from northeastern Yucatan peninsula, western Cuba, northern Florida, southeastern Georgia, and coastal areas of the Carolinas through Tuesday.

The Miami-based agency warned of the potential for tornados in northern Florida and parts of southern Georgia.

And "localized coastal flooding and dangerous surf are possible along the Atlantic coast from Florida to North Carolina within the tropical storm warning area," the NHC warned.

In a news release Florida state governor Rick Scott declared a state of emergency in 34 central and northern counties, calling Colin "a severe threat" that "requires that timely precautions are taken to protect the communities, critical infrastructure and general welfare of this state."

Weather update: @FlyTPA has seen 85 delays and 19 cancellations so far today. Please check with your airline for updates on your flight.

The third tropical storm of the season -- which began June 1 and will extend through November 30 -- will reach the Atlantic coast Tuesday morning.

The US National Oceanic and Atmospheric Administration predicts the Atlantic will get between 10 and 16 storms this year, and between four and eight could be hurricanes.

The uptick follows a below-average 2015 season that recorded 11 tropical storms in the Atlantic, with just four hurricanes, two of them major.