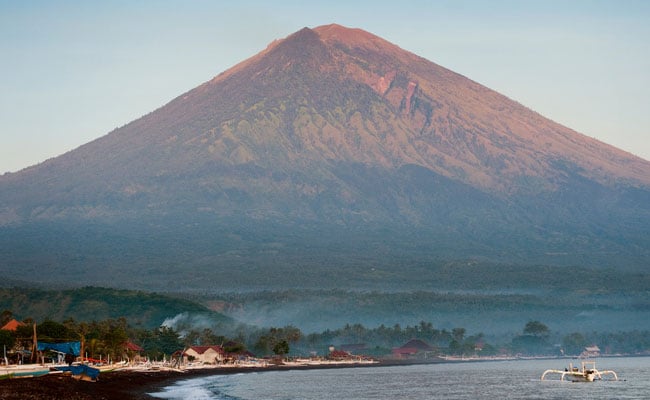 Authorities have raised alert levels for a volcano on the Indonesian island of Bali. (File Photo)

Jakarta, Indonesia: Authorities have raised alert levels for a volcano on the Indonesian resort island of Bali after hundreds of small tremors stoked fears it could erupt for the first time in more than 50 years.

Mount Agung, about 75 kilometres from the tourist hub of Kuta, has been rumbling since August and officials have banned people from venturing within 7.5 kilometres (4.7 miles) of its summit.

No volcanic ash has been seen spewing from the crater. But hundreds of small tremors have rattled the mountain in the past two days, causing about 350 people to evacuate their homes Monday, although they returned the next day.

"Even though seismicity is not as sharp as two days ago, as much as 480 seconds of tremors have occurred. The community must remain vigilant," Willem Rampangilei, the head of Indonesia's National Disaster Mitigation Agency, said in a statement Wednesday.

The airport on the resort island, a top holiday destination that attracts millions of foreign tourists every year, has not been affected but airport management are watching the situation closely.

Promoted
Listen to the latest songs, only on JioSaavn.com
"All flight activities are still normal, there is no cancellation or volcanic ash," Yanus Suprayogi, a spokesman for Bali's Ngurah Rai airport, told AFP.