Toyota tests cars that communicate with each other 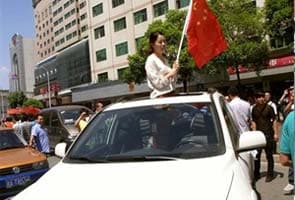 Susono, Japan: Toyota Motor Cop. is testing car safety systems that allow vehicles to communicate with each other and with the roads they are on in a just completed facility in Japan the size of three baseball stadiums.

The cars at the Intelligent Transport System site receive information from sensors and transmitters installed on the streets to minimize the risk of accidents in situations such as missing a red traffic light, cars advancing from blind spots and pedestrians crossing the street. The system also tests cars that transmit such information to each other.

In a test drive for reporters Monday, the presence of a pedestrian triggered a beeping sound in the car and a picture of a person popped up on a screen in front of the driver. A picture of an arrow popped up to indicate an approaching car at an intersection. An electronic female voice said, "It's a red light," if the driver was about to ignore a red light.

The 3.5 hectare test site looks much like the artificial roads at driving schools, except bigger, and is in a corner of the Japanese automaker's technology center near Mount Fuji in Shizuoka Prefecture, central Japan.

Toyota officials said the smart-car technology it is developing will be tested on some Japanese roads starting in 2014. Similar tests are planned for the U.S., although details were not decided. Such technology is expected to be effective because half of car accidents happen at intersections, according to Toyota.

Managing Officer Moritaka Yoshida said Toyota sees preventing collisions, watching out for pedestrians and helping the driving of the elderly as key to ensuring safety in the cars of the future.

"We offer the world's top-level technology," he told reporters.

All automakers are working on pre-crash safety technology to add value to their cars, especially for developed markets such as the U.S., Europe and Japan. But the strongest sales growth is coming from emerging markets which are eventually expected to show more interest in safety technology.

Toyota's Japanese rival Nissan Motor Co. recently showed cars that were smart enough to stop on their own, park themselves and swerve away from pedestrians who suddenly jumped into the vehicle's path.

Toyota also showed a new feature that helps the driver brake harder to prevent bumping into the vehicle in front. Toyota officials said drivers often fail to push hard on their brakes in such situations because they get into a panic.

Toyota said the technology will be available "soon," without giving a date, and hinted it will be offered for Lexus luxury models. Luxury models already offer similar safety features such as automatic braking. Technology involving precise sensors remains expensive, sometimes costing as much as a cheaper Toyota car.

Toyota has also developed sonar sensors that help drivers avoid crashing in parking lots. One system even knows when the driver pushes on the gas pedal by mistake instead of the brakes, and will stop automatically.

Rear-end collisions make up 34 percent of car accidents in Japan, comprising the biggest category, followed by head-on collisions at 27 percent.

Cars that stop and go on their own, avoiding accidents, are not pure science fiction, experts say.

Alberto Broggi, professor at the University of Parma and an expert on intelligent transportation systems, said the idea of the accident-free cars is "very hot," and probably within reach on some roads within several years.

"I'm sure we will arrive to such a technology even if I don't know when exactly," he said.