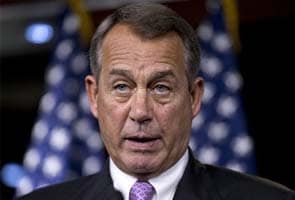 Washington: US House Speaker John Boehner expressed confidence on Thursday that he and his Republicans can work with President Barack Obama to hammer out a comprehensive deal on immigration.

Boehner's straightforward acknowledgement of the need for bipartisan cooperation won praise from Democrats, with whom he said Republicans could find "common ground" in order to avoid looming tax hikes and federal spending cuts that could drag the country back into recession.

Resolving both the "fiscal cliff," as the year-end economic challenges have been described, and US immigration have emerged as key goals in the aftermath of Tuesday's election, which saw Obama win another four-year term.

Republican nominee Mitt Romney's tack to the right during his presidential campaign, particularly on immigration, was a key reason he lost the Hispanic vote by a substantial margin, which contributed to his defeat.

Now, with Republican soul-searching in the aftermath of the election, immigration is seen as one way to frame the party as more inclusive of Latinos, the fastest-growing ethnic group in the United States.

"This issue has been around far too long," Boehner, the country's most senior Republican, told ABC News.

"A comprehensive approach is long overdue, and I'm confident that the president, myself, others can find the common ground to take care of this issue once and for all."

Congress and the White House have struggled for years to come to terms with the contentious issue.

Romney and Boehner had accused Obama of promising to address immigration at the beginning of his first term and then failing to offer a solution even with Democrats in control of both chambers of Congress.

Republicans regained control of the House in 2010, while Democrats rule the Senate. The split will continue in the 113th Congress, starting January 3.

Obama has accused Republicans of blocking him on immigration. But late Thursday, a senior Democrat extended an olive branch.

"This is a breakthrough to have the speaker endorse the urgency of comprehensive immigration reform," Senator Charles Schumer, chairman of the Senate Immigration Subcommittee, said in a statement.

"Democrats in the Senate look forward to working with him to come up with a bipartisan solution."

Republicans in the past have rejected the "Dream Act," which would legalize undocumented immigrants who came to the country as children, and supported tough anti-immigrant legislation in Arizona along the border with Mexico.

Rising Republican star Senator Marco Rubio opposed the Dream Act, and has declined to say whether he believes Congress should allow those immigrants to become citizens without going home first.

But the Cuban-American lawmaker made clear on the day after the election that his party needed to reach out to Hispanics.

The government says some 11.5 million undocumented immigrants live in the United States.

Boehner presides over one chamber of a sharply divided Congress, which must compromise if it is to avoid serious fiscal pain.

While he said he remained "optimistic that we're going to be able to find common ground to avoid this fiscal cliff," Boehner was adamant that letting tax breaks for the wealthy expire was not likely to be part of the equation.

"I made clear yesterday that raising tax rates is unacceptable, and frankly, it couldn't even pass the House," he said.

"I'm not sure it could pass the Senate."

In the same ABC interview, Boehner hinted he was ready to drop Republican opposition to Obama's health care reforms.

Asked whether he would seek to fully repeal Obama's signature piece of legislation, Boehner said "the election changes that."

He later indicated in a message on Twitter that Republicans still oppose the changes and want the legislation reversed.

"ObamaCare is law of the land, but it is raising costs & threatening jobs. Our goal has been, and will remain, #fullrepeal," Boehner wrote.