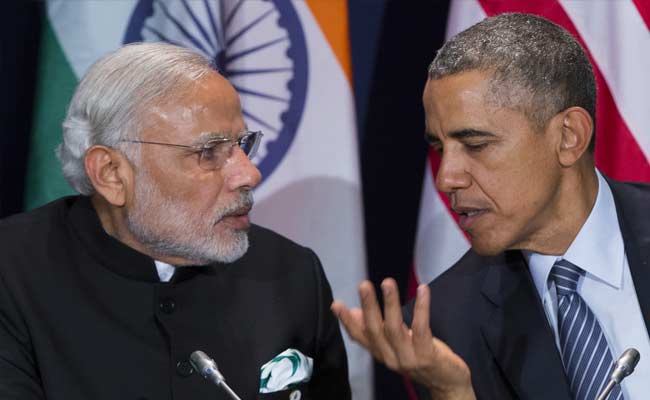 LE BOURGET, France: Call them the culprits of carbon.

Leaders of the United States, China and India - the world's top three carbon polluters - engaged in some private diplomacy Monday on the sidelines of the international climate change conference. And while each spoke of a shared interest in reducing greenhouse gas emissions, members of the trio differed in nuance. Each has to attend to his own interests. A look at the geopolitics of climate change, as practiced by President Barack Obama, Chinese President Xi Jinping and Prime Minister Narendra Modi:

China gets the distinction of top billing among carbon polluters, having overtaken the US as its economy has rapidly expanded. It accounts for about 28 percent of global emissions. The US is second at 14 percent. India places third, at 7 percent. Those 2013 numbers are the latest figures from the US Energy Department's Carbon Dioxide Information Analysis Center. New figures come out next week.

The president said the US "not only recognizes our role in creating this problem, we embrace our responsibility to do something about it." His administration has pledged to reduce US emissions to 26 percent to 28 percent below 2005 levels within 10 years - if the Republican-controlled Congress or the courts don't block him or his successors reverse him.

But Obama also wants developing nations - who didn't play a big role in creating the problem - to share responsibility for fixing it by limiting their future greenhouse gas emissions. He said they need to "skip the dirty phase of development" and go straight to cleaner technologies. And that could be costly. There's a long-running dispute over whether developing nations should share the same burden as industrialized nations, and neither Xi nor PM Modi fully embraced Obama's all-in-it-together message. Obama did acknowledge "you cannot forge a climate agreement without taking into consideration the level of development." But Congress is blocking the first installment of the $3 billion he pledged to a U.N. fund to help developing nations transition to cleaner energy and cope with the effects of climate change.

China has had a change in mindset since being accused of obstructing climate talks in Copenhagen six years ago. It has invested in solar, wind and hydro power and promised to cut carbon emissions per unit of economic output by 65 percent. Xi also has pledged $3.1 billion to help developing countries combat climate change. But the Chinese president stressed Monday that the eventual climate deal must include aid for poor countries and respect differences between developing and established nations. He said the deal should accommodate national interests. "Addressing climate change should not deny the legitimate needs of developing countries to reduce poverty and improve living standards," he said.

With at least 300 million people lacking access to electricity, India faces a particular challenge in restraining future greenhouse gas emissions as its economy grows and brings prosperity to those millions. It has promised to reduce its emissions intensity by 33 percent to 35 percent by 2030 from 2005 levels. Emissions would continue to grow under the plan, as its economy grows. But the increase relative to economic output would be lower than otherwise.

PM Modi called Obama his friend and pledged to work shoulder-to-shoulder with the US on new technology initiatives. But he's also sounding a not-our-fault message.

He stressed that climate change is a global problem "not of our making" and called for restoring "a balance between economy and ecology." As PM Modi wrote in the Financial Times this week: "The principle of common but differentiated responsibilities should be the bedrock of our collective enterprise. Anything else would be morally wrong." Obama, for his part, said that while he recognized PM Modi's deeply felt desire to pursue "development, growth and poverty eradication," the Paris deal also "has to reflect serious and ambitious action by all nations to curb their carbon pollution."
Comments
Carbon pollutersinternational climate change conferencegreenhouse gas emissionsglobal emissionsParis climate change