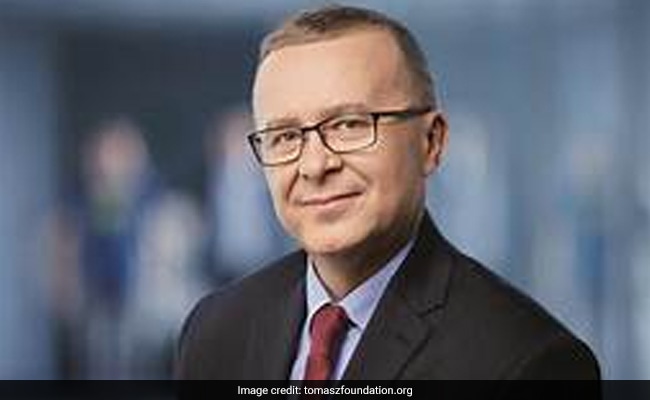 Tomasz Biernacki hasn't done any major media interviews since his car crash a decade ago.

The Polish businessman, 46, hasn't done any major media interviews since crashing his Ferrari F430 more than a decade ago. He didn't show up at the stock exchange when his company went public in 2017, and his management team rejects investor requests to meet in Warsaw, instead asking them to visit the company's headquarters about 310 kilometers (193 miles) from the capital.

But his business, food retailer Dino Polska SA, is generating plenty of interest. The stock has rallied a record 88% this year, among the biggest gainers of the Stoxx Europe 600 Index, while many traditional retailers struggle from the effects of the coronavirus pandemic. For Dino, which focuses on rural areas, the lockdown to halt the spread of Covid-19 pushed up sales even more.

"Dino investors seem unmoved by the fact that they can't meet the company's founder," Wood & Co. analyst Lukasz Wachelko said by phone. "Some of them haven't even seen a Dino store at all, but the way the company managed through pandemic gives the owner additional credibility."

It has lifted Biernacki's fortune to $3.6 billion, closing the gap with Poland's richest person, synthetic-rubber mogul Michal Solowow, according to the Bloomberg Billionaires Index.

Biernacki is known for his frugality, rejecting appeals for additional staff or spending. His official biographies on the firm's website and prospectus don't provide any information about his education or activities before he founded Dino more than two decades ago -- years after the collapse of communism gave entrepreneurs the first opportunity to benefit from the country's economic transformation.

Biernacki turned down a requests to comment for this story in accordance with the company's information policy, said Grzegorz Urazinski, Dino's head of investor relations.

Dino, founded in 1999, was on a winning streak even before Covid-19 accelerated its growth.

Annual profit has more than tripled since 2015 and its store network has grown 12-fold in less than a decade. When the pandemic triggered a lockdown, shoppers flocked to its outlets to stockpile items including canned food, shelf-stable milk, soap and basic cosmetics. The company, which doesn't offer online-delivery services, said this month it may be able to increase margins as it expands further in Poland.

A slower pace of new store openings is the biggest risk for Dino's valuation, but for now investors are enjoying the fast growth and are willing to pay a premium for the shares, said Piotr Bogusz, an analyst at MBank SA. Dino trades at 36 times earnings estimated for the next year, compared with about 20 times for peers Jeronimo Martins SGPS SA and Eurocash SA, data compiled by Bloomberg show.

Biernacki opened his first store in Gostyn, a town in western Poland, and soon realized that he could get ahead with neighborhood locations rather than competing with the giants in the bigger cities. After he bought a meat-processing plant in 2003, Dino became a magnet for clients seeking fresh products.

When Poland's oldest private equity fund, Enterprise Investors, acquired a 49% stake in 2010, the retailer expanded further and invested in new logistics centers. Its local supermarkets provided all the necessary goods and was soon an alternative to large hypermarkets. Dino's red-and-green logo became ubiquitous in western Poland, and the company gradually entered other regions.

Enterprise Investors sold its holding via an initial public offering seven years later, just as Polish retailers were getting a boost from new state subsidies for families. For investors, Dino was the perfect proxy for the nation's booming consumer-staples market. Jeronimo Martins, which operates the country's biggest supermarket chain, had exposure to then-ailing Portugal and Colombia, while food wholesaler Eurocash was dealing with structural problems at the smaller, independent stores it supplied.

"The company is exploiting a niche of less-urbanized areas where the competition is much lower and the customer base is a beneficiary of increasing disposable income supported by minimum wage growth and social-stimulus programs," said Krzysztof Kawa, an analyst at Ipopema Securities SA.

He predicts the number of stores could triple in the long term. "Dino is constantly pushing the boundaries."