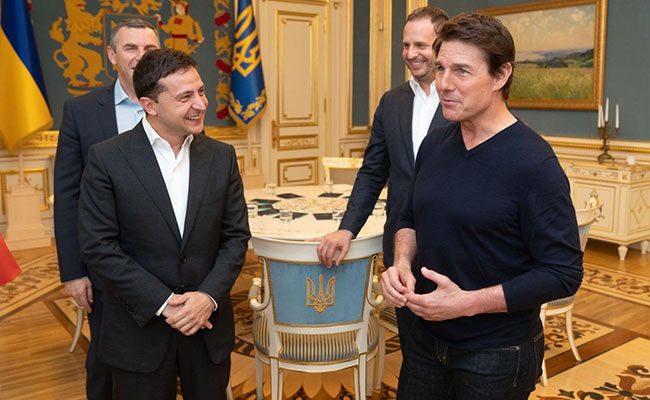 Zelensky, who was a popular comedian until his shock presidential election win this spring, told the 57-year-old actor about his own experiences in cinema, the press service said.

It was not revealed whether the pair discussed the president's current role in a real-life drama: the scandal that has launched impeachment proceedings against US leader Donald Trump.

Photos showed the Ukrainian president beaming as he stood by the casually dressed blockbuster star in an official meeting room on Monday.

"During the meeting, Tom Cruise informed Volodymyr Zelensky that he was interested in Ukrainian locations for the shooting of one of his new film projects," the presidency said.

Earlier Cruise was spotted on the Soviet-era Kiev subway.

Some commentators criticised Zelensky for meeting the actor rather than focusing on his own mission impossible: tackling corruption and ending the war with Russia-backed separatists in the country's east.

Others joked about the real reason for Cruise's visit.

"Tom Cruise came here to prepare for the role of Volodymyr Zelensky in a new movie about Trump's impeachment," blogger Petro Terentiev wrote on his Facebook page.

Trump is accused of pressuring Zelensky on July 25 to supply dirt on former US vice president Joe Biden, the favorite to represent Democrats against Trump in the 2020 presidential election.