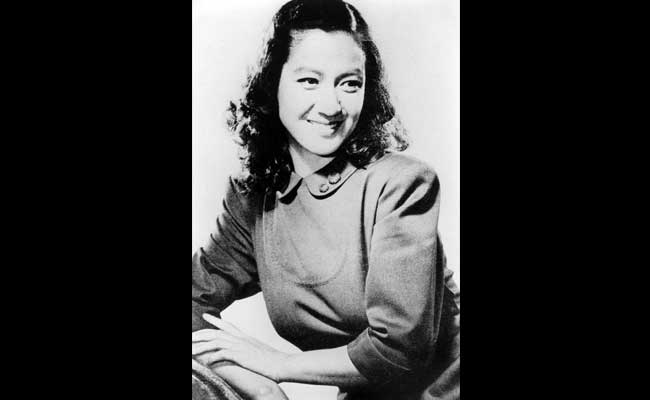 This undated black and white picture shows Japanese actress Setsuko Hara, who starred in the iconic "Tokyo Story" and other films by renowned directors. (AFP)

Tokyo: The Japanese actress who starred in famed director Yasujiro Ozu's "Tokyo Story" and a host of other classic films has died aged 95 -- with the news only emerging nearly three months after her passing.

The death of Setsuko Hara dominated Japanese front pages today, with headlines lauding her as a "legendary" performer and the "Eternal Madonna".

Hara had been in hospital since mid-August and her death on September 5 from pneumonia was not immediately made public "as she wished no fuss be made", her 75-year-old nephew told Kyodo News agency.

A private funeral service was held, he added.

Film distribution company Shochiku on today set up a stand for floral tributes to Hara at a Tokyo theatre, which was coincidentally showing the Ozu-directed "Late Spring" in which she starred as part of a retrospective of Japanese movies.

On display were her photo and the message: "We pray for the repose of Ms Setsuko Hara."

Hara, whose real name was Masae Aida, made her debut in the 1930s, but rose to prominence after World War II working with Ozu, most notably on his acclaimed "Tokyo Story".

In that 1953 film, considered a masterpiece of global cinema, she played a woman widowed by the war who treats the ageing parents of her late husband kindly during their visit to Tokyo, in contrast to their own children, who are too busy.

A poll of noted regional filmmakers and international critics published last month at the Busan International Film Festival rated the drama as the best Asian film of all time.

In "Late Spring" as well as Ozu's "Early Summer", she played a modest and elegant woman, in movies that tackled the issue of fraying family bonds as Japan's economy rapidly modernised.

She appeared in "No Regrets for Our Youth" and "The Idiot" by Akira Kurosawa -- director of "Seven Samurai" -- and in the work of Tadashi Imai and Mikio Naruse.

Hara -- who reportedly never married and was known in Japan as the "Eternal Virgin" -- abruptly withdrew from the movie industry after her last film in 1962.

In retirement she lived in a house next to relatives in Kamakura, a scenic seaside city south of Tokyo that served as Japan's medieval capital.

She never explained her sudden departure from the industry, adding to the mystique surrounding her. The mass-circulation Yomiuri Shimbun daily reported that her last public appearance was at Ozu's wake in December 1963.

In a rare interview with the Yomiuri in 1992, she played down her accomplishments as one of Japan's foremost actresses during what some herald as a golden age of cinema for the country.

"It was not just me who was shining," she told the top-selling newspaper.