Psychologists say a mix of herd mentality and over-exposure to coverage of the virus is to blame. 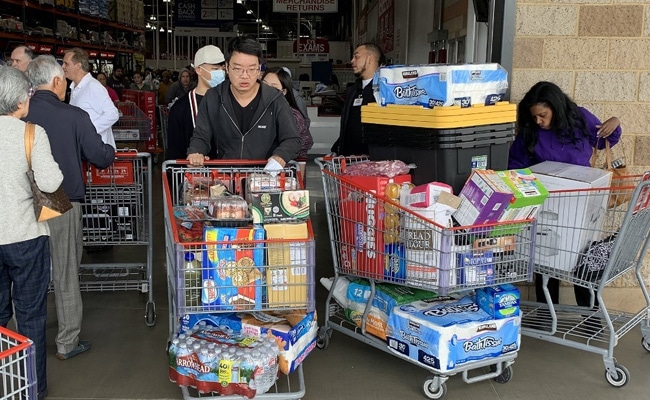 Shelves are being stripped bare of toilet rolls, hand sanitiser and surgical masks everywhere from Japan to France to the United States as panic buying criss-crosses the globe with the coronavirus, defying repeated calls for calm and disrupting supply chains.

Obsessively documented on social media, scrambles to the shops and empty shelves are adding panic and confusion to the fight against an epidemic that has killed thousands, placed millions under quarantine and battered global markets.

Australia's biggest supermarket this week began rationing sales of toilet paper after police had to be called to a shop in Sydney when a knife was drawn in a scuffle over the scarce commodity.

On Saturday Japan's prime minister took to Twitter to calm fears of a national shortage, while social media photos from the US show toilet paper shelves lying bare.

Psychologists say a mix of herd mentality and over-exposure to coverage of the virus is to blame.

"We might be less irrational if we weren't being reminded so much of the potential dangers by the news," London-based consumer psychologist Kate Nightingale told AFP.

"We either avoid the topic or we go completely nuts and stock up on anything we might just need."

Panic buying of non-medical items like toilet paper "gives people this sense of control that 'I will have what I need when I want'," Andy Yap, a psychologist and Charlene Chen, who specialises in marketing and business in Singapore told AFP in an email.

The city-state experienced its own recent run on toilet paper, traceable, they said to a "believable" rumour of an impending shortage due to shutdowns in virus-stricken China, a major producer.

Endlessly scrolling through social media also "distorts our perceptions and makes us think that things are a lot more serious than they truly are," they said.

As the uncertainty grows, they added, items such as surgical masks and hand sanitiser transform into "problem-solving goods... that seemingly help people gain control over the virus."

"The odd one out"

Single-use surgical masks that typically retail for just a few US cents are also hot property, exacerbated by restrictions on exports from China, the leading producer, as the government keeps more back for domestic usage.

Last month ten thousand people queued outside a Hong Kong shop that had secured a shipment, and days later masks were voted the most desireable gifts to receive for Valentine's Day.

In London, masks are now going for more than 100 times their normal retail price, while French authorities said they will requisition all face mask stocks and production.

This is despite the US Centers for Disease Control and Prevention saying it did not "recommend the use of facemasks" to help combat the outbreak.

But in crowded, paranoid cities where others are already wearing them, donning a mask can be comforting -- if ineffective.

"You don't want to be the odd one out," Nightingale said.

"At the end of the day, we do need our social groups for survival so it's a primal instinct to obey whatever needs that society imposes on us."

As more countries report new cases, Yap and Chen said it was important for authorities to "re-establish control" over information and rumours that spark hoarding and panic-buying.

"In times of uncertainty, it is good to set rules because rules provide a sense of order and control."

Governments also need to be clear in explaining any new rules and why they are important in the fight against the virus.

But, Nightingale said, with distrust of health authorities on the rise in the West over mandatory vaccinations and with governments and companies "among the least trusted institutions," this might be difficult.

"Hiring trusted faces could help... David Attenborough might work for a certain kind of customer profile, like the over 40s. For younger profiles, you could turn to social media influencers."