Retailers have also experienced shortages of masks and hand sanitisers amid fears over the deadly coronavirus outbreak, which has infected more than 90,000 people and killed 3,100 across the world. 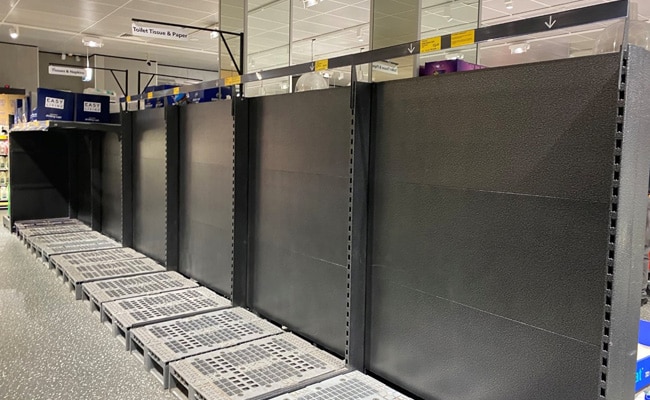 Empty shelves at a supermarket at Macquarie Centre in Macquarie Park, Australia. (Reuters)

Australia's biggest supermarket on Wednesday announced a limit on toilet paper purchases after the global spread of coronavirus sparked a spate of panic buying Down Under.

Woolworths said the restriction of four packs of toilet paper per person would apply "to ensure more customers have access to the products".

"It will help shore up stock levels as suppliers ramp up local production and deliveries in response to higher-than-usual demand," the company said in a statement.

Despite government assurances, there has been a run on some items at Australian supermarkets in recent days, with images on social media purportedly showing shelves stripped of goods such as toilet paper, pasta and canned food.

Retailers have also experienced shortages of masks and hand sanitisers amid fears over the deadly coronavirus outbreak, which has infected more than 90,000 people and killed 3,100.

The vast majority of cases have been in China, but South Korea, Italy and Iran have also emerged as hotspots.

Australia has reported 41 confirmed cases of the virus, including one death.

Prime Minister Scott Morrison said he had spoken to the country's two major supermarket chains -- Woolworths and its rival Coles -- about their response to panic buying.

"I can understand why people may be concerned, and go to supermarkets, and do those sorts of things. But the advice is that's not necessary," he told 2GB Radio on Wednesday.

"Forgive Those Who Killed Our Father": Sons Of Killed Saudi Journalist Jamal Khashoggi