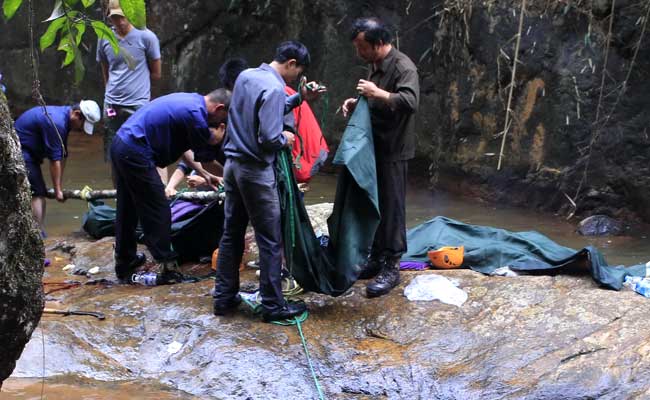 It was not immediately clear how the tourists died.

The trio, a man and two women, were found amid rocks and pools of water near the falls outside of Dalat, a mountainous city that draws tourists with its crystal lakes and scenic landscape.

It was not immediately clear how they died.

"We are working on the reasons for their deaths," Dalat city's deputy police chief Bui Duc Ro told AFP.

The British Embassy in Hanoi confirmed the deaths of three British nationals near Dalat and said it was providing support to their families.

"We are in close contact with local authorities in Vietnam on their behalf," the embassy said in a statement.

State-run media said the two women were aged 25 and 19 and had entered Vietnam at the start of the month, but the police officer could not confirm their identities.

Dozens of emergency workers climbed down a steep rocky slope near the waterfall to retrieve the bodies, which were reportedly found with life jackets on.

Visitors can rappel down the 20-metre waterfall as well as luge around the site.