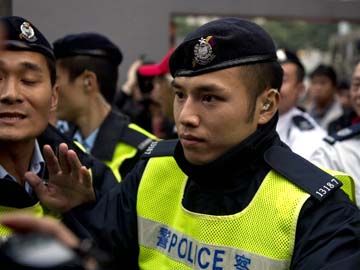 A Hong Kong policeman stares at a protester during a pro-democracy demonstration in Hong Kong on January 1, 2014.

Organisers said around 30,000 people took part in the annual New Year's Day march for democracy, while police put the figure at 11,100 - less than half their estimate last year.

Marchers carried banners reading "Democracy will prevail" as they sang and shouted slogans against the government of the semi-autonomous Chinese city.

"Because we are Hong Kong citizens, we must vote," said Sharon Tang, a 49-year-old trading company employee, adding that residents of the former British colony have the intelligence to choose their leaders.

China, which took back Hong Kong in 1997, has promised that its people will be able to vote in 2017 for their next chief executive.

Currently the leader is elected by a 1,200-strong pro-Beijing committee.

But many pro-democrats fear that China will control the choice of candidates to secure the election of a sympathetic official.

They say the public should have the right to nominate candidates, something which China rejects.

Joseph Cheng, professor of political science at City University of Hong Kong, said the lower turnout did not indicate that Hong Kong had put the democracy issue on the back-burner.

People have adopted a "wait-and-see attitude" after an official public consultation period on a future electoral system began less than a month ago, he said.

A survey by Hong Kong University in December put "constitutional development" as the second most important problem, after housing, that the government should tackle in 2014.

"Hong Kong people have been on the streets over the years to strive for what we deserve, and what the Chinese government has not given us," marcher Charles Tam, 25, told AFP.

One protester had red tape wrapped around her arms and covering her mouth to symbolise an inability to express one's views.

The marchers left Victoria Park - named after the 19th century British monarch who oversaw Hong Kong's seizure from China - in mid-afternoon and staged a rally in the Central financial district afterwards.

A huge poster depicting the city's current chief executive Leung Chun-ying with an egg plastered on his head was hung over the park lawn.

The "battle" must be won Hong Kong has its own government and legal system, and its residents enjoy rights and freedoms unknown on the Chinese mainland.

But there are frequent protests in the city of seven million over slow progress towards full democracy, and discontent is also growing over sky-high housing prices and a growing wealth gap.

Yeung said he saw this year and the ongoing debate over the city's future democratic system as a "battle" that must be won.

"This rally will give the CCP (Chinese Communist Party) a clear message that if you don't give us real democracy, there will be direct action from the people," he said.

Mimicking the Occupy protests of 2011 in cities such as New York and London, some activists have threatened to take over the streets of Hong Kong's business district later this year to try to force officials to guarantee a fair electoral system.

Promoted
Listen to the latest songs, only on JioSaavn.com
A "New Year Civil Referendum" was also conducted in Victoria Park and over the Internet on Wednesday, and drew over 62,000 voters.

The poll showed more than 94 percent of respondents think that there should be an "element of civil nomination" when choosing the city's leader.
Comments
Chinese governmentNew Years DayHong KongChina