Thousands Of Dead Fish Wash Up On Drought-Stricken Greek Lake

The lake, 30 kilometres (18 miles) from the city of Thessaloniki, has experienced the phenomenon repeatedly over the last few decades. 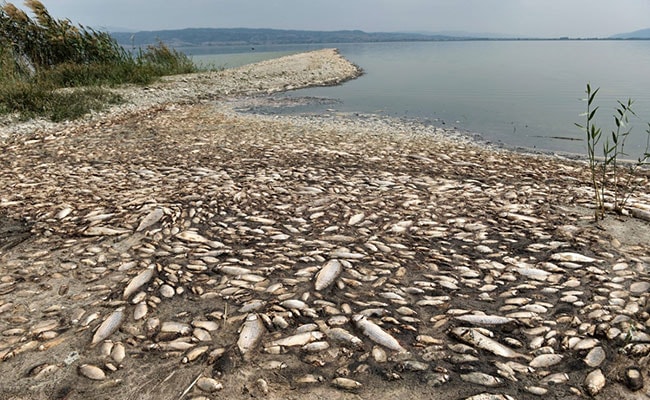 Dead fish lie on a beach of Lake Koroneia, some 30km east from Thessaloniki

Thousands of fish washed up dead on the shores of Lake Koroneia in northern Greece on Thursday as a result of high temperatures and declining water levels, authorities said.

A long period of drought and high temperatures left the fish high and dry, Dimitra Bobori, responsible for lakes in the Macedonia region, told AFP.

The lake, 30 kilometres (18 miles) from the city of Thessaloniki, has experienced the phenomenon repeatedly over the last few decades.

Koroneia's depth has plummeted from nine feet (2.8 metres) in 2014 to between 60 and 80 centimetres today, Bobori said, adding that engineering works had failed to reverse the trend.

The lake, known as a rich habitat and a key migratory bird lane, is a member of the European environmental protection network Natura.

After several warnings calling on Greece to better protect the lake, the European Commission brought the matter to the European Court of Justice in 2011.

Ecologists and the Greek birdwatchers association blame the pollution on industries and agricultural businesses that flout environmental standards.

Since 1995, thousands of dead fish have surfaced on the shores of Lake Koroneia at least four times.

In 2007, 200 birds were found dead on the shores of the lake after a bacterium outbreak.

But the biggest disaster occurred in 2004 when 4,500 birds died after the appearance of the toxin Clostridium botulinum, which develops in stagnant or polluted water, causing the disease botulism.