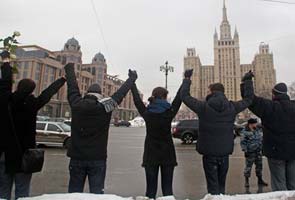 Putin, who was president from 2000 to 2008, is running for a third term in a March 4 election. He is expected to win easily against four Kremlin-approved challengers, but an unprecedented wave of protests has undermined his image as a strong leader who rules with broad public support.

Sunday's protest appeared to have drawn close to the 34,000 people that opposition activists estimated were needed to complete the chain along the Garden Ring. Demonstrators wore the white ribbons that have become a symbol of the peaceful anti-Putin protest movement.

Putin supporters also were out on the Garden Ring on Sunday. Wearing heart-shaped red signs around their necks that said "Putin loves everyone," they copied the protesters by handing out ribbons of their own. Some passerby refused to take the pro-Putin ribbons, which had stripes of white, blue and red like the national flag.

Promoted
Listen to the latest songs, only on JioSaavn.com
Protests also were held on the Garden Ring on two previous Sundays. Hundreds of demonstrators drove cars decorated with white ribbons and balloons as others waved from the sidewalks and overpasses as the cars went by, horns blaring.

The largest protests the country has seen in two decades began in December following a parliamentary election that saw widespread vote rigging to boost the results for Putin's party.