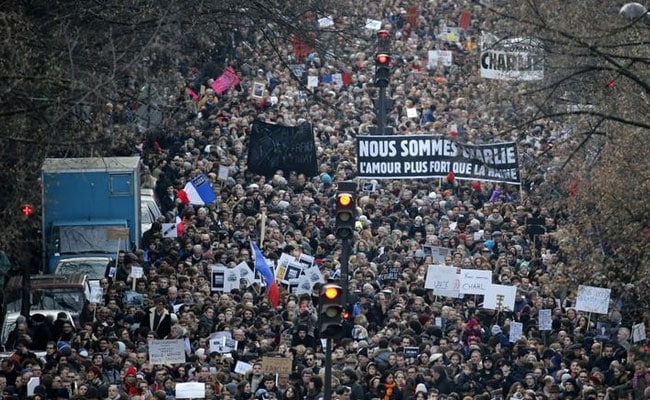 A general view shows hundreds of thousands of French citizens taking part in a solidarity march (Marche Republicaine) in the streets of Paris on January 11. (Reuters)

Paris: This week's edition of Charlie Hebdo, put together by survivors of last week's newsroom massacre in Paris by Islamist gunmen, will defiantly feature caricatures of the Prophet Mohammed, its lawyer said on Monday.

The special issue, to come out on Wednesday, will also be offered "in 16 languages" for readers around the world, one of its columnists, Patrick Pelloux, said.

Charlie Hebdo's lawyer, Richard Malka, told French radio the upcoming publication will "obviously" lampoon Mohammed - among other figures - to show staff will "cede nothing" to extremists seeking to silence them.

The two gunmen who slaughtered 12 people in their attack on Charlie Hebdo's offices last Wednesday, including five of its top cartoonists and three other staff members, claimed as they left the scene that they had "avenged the Prophet Mohammed".

That was a reference to the fury expressed in some Muslim countries over past Mohammed cartoons which Charlie Hebdo had printed.

The gunmen, brothers Cherif and Said Kouachi, claimed to belong to the jihadist group Al-Qaeda in Yemen.

They were killed on Friday, as was an accomplice claiming affiliation to the rival Islamic State group, Amedy Coulibaly, in separate but coordinated French commando raids on sites in and near Paris where they had taken hostages.

In all 17 people and the three Islamist attackers were killed in three days of violence.

Charlie Hebdo's offices were firebombed without casualty in 2011 when it published cartoons lampooning Mohammed.  Its staff has been receiving death threats from radical Muslims since 2006, when it reprinted Mohammed cartoons by a Danish newspaper, Jyllands-Posten in the name of freedom of expression.

The surviving Charlie Hebdo staff have since Friday been working out of the offices of another French newspaper, Liberation, with equipment loaned by other media organisations. Their own blood-soaked offices remain sealed by police, with the entrance covered with flowers, pencils and candles in tribute to the dead.

The 44-year-old newspaper has always sought to break taboos with its provocative cartoons on all religions, current events and prominent personalities.

It had been sliding towards bankruptcy before the attack against it. It used to typically sell only half of the 60,000 copies it printed weekly.

Promoted
Listen to the latest songs, only on JioSaavn.com
But since gaining worldwide notoriety in the past few days, it has earned pledges of support from the French government and media groups.

One million copies of this week's special "survivors' issue" are to printed, with many of them to be made available outside of France.
It will be created "only by people from Charlie Hebdo," its financial director, Eric Portheault, told AFP. Offered contributions, notably from cartoonists in France and other countries, were declined.