This Start-Up Is Launching Remote-Controlled 'Grocery Store On Wheels'

Robomart vehicles will be restocked and can be recharged at a nearby Robomart facility, say officials 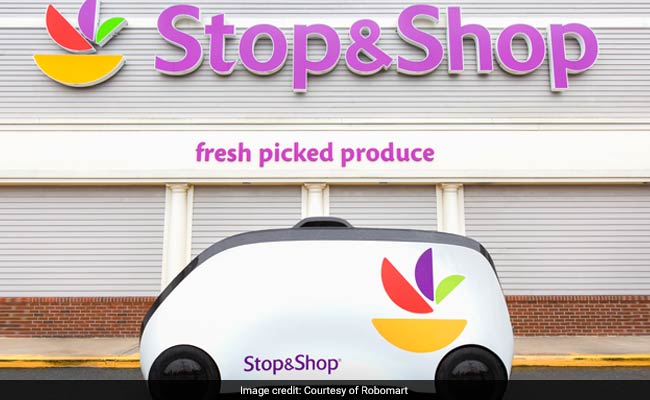 At first glance, the black and white Robomart vehicle, with its minimalist design and rounded body, looks like a vision of the future.

But if you ignore the lack of a steering wheel and human driver, the electric, grocery-filled machine - about the size of a minivan - is actually something of a throwback.

For much of US history, perishable kitchen items such as produce, milk, eggs and ice arrived outside people's homes on a daily basis, first by horse-drawn wagon and later by truck. This curbside service would eventually fall victim to refrigeration, automobiles and the rise of the supermarket, making weekly shopping trips the modern American norm, according to Boston Hospitality Review.

Now Robomart - a Santa Clara, California-based start-up - seeks to merge the old with the new. From AmazonFresh to Peapod and Instacart, there's no shortage of grocery delivery services flooding the marketplace. But Robomart founder and CEO Ali Ahmed said his company isn't a grocery delivery service. Instead, he considers Robomart an on-demand, remote-controlled "grocery store on wheels."

Last week, Robomart announced a new partnership with grocery store chain Stop & Shop and will begin operations in the Greater Boston area in the spring. But some local officials say the company hasn't received proper permitting to do so, according to the Boston Globe. Moving forward, Ahmed said, Robomart hopes to partner with other retailers that would lease its vehicles and brand them as their own, creating self-driving grocery fleets.

"We turned delivery on its head for a number of reasons," Ahmed said. "You don't have to spend time ordering online and you get to pick out food yourself, which is the fundamental reason groceries have never flourished on e-commerce. We are making it not only convenient, but the fastest possible way to shop. "

"Even at its fastest, delivery will take up to an hour," he added.

How does it work?

Unlike a typical grocery delivery service, which requires customers to select groceries online first, Robomart vehicles - which can reach 25 mph - will be dispatched to a particular neighborhood, where customers can summon one through an app. There is no human on board: The delivery vehicles will be operated by people from another location using "cameras and navigation systems," according to the Globe.

Once it has arrived, customers can open the vehicle's sliding doors using the app, giving them access to a selection of fruits, vegetables, "convenient food items" and even hot meals, Ahmed said.

The vehicles' RFID and computer vision technology automatically track each item that is removed from the vehicle before charging customers' accounts and emailing them a receipt, he said, noting that once the doors close, the transaction is complete. A single vehicle, which is about 12 feet long and six feet tall, can hold about a half-ton of goods, Ahmed said.

"There's always a trade-off between selection and convenience," he said. "We're more convenient and we carry a lot more than a vending machine, but less than a standard convenience store. We're able to get a pretty full selection in there."

Robomart vehicles will be restocked and recharged at a nearby Robomart facility, the company said.

Boston officials have voiced skepticism about Robomart's delivery model and claimed that a company using a remotely operated vehicle would need permission to launch on public roads. In Boston, self-driving vehicles are required to have a human "safety driver" behind the wheel, according to the city.

Because his vehicles are remotely operated, Ahmed claims they aren't actually autonomous.

Rep. William M. Straus, a Democratic state legislator who chaired the Joint Committee on Transportation last year, told the Globe that Robomart's vehicles could pose problems for police - in case of an accident, for example.

"When an officer arrives at the scene, what they are trained to do is make observations . . . of the person," Straus said. "Is this person impaired in any way? Do they have a Massachusetts driver's license?"

If the vehicle's driver is miles away and intoxicated, he added, they may be able to avoid charges.

Autonomous delivery vehicles aren't the only way grocery stores are implementing robotic technology. Last week, Stop & Shop's parent company, Ahold Delhaize, announced plans to deploy about 500 robots to stores such as Giant Food, Martin's and Stop & Shop. The robots will begin arriving "in waves" over the coming months, according to Giant, which expects to have the devices fully deployed in about six months.

Dubbed "Marty," the robots are programmed to move around the store unassisted, scanning the floors for spills and trip hazards, which are reported to human workers.

In a statement emailed to The Washington Post, Marc Perrone, president of the United Food & Commercial Workers International Union - which represents workers in grocery stores such as Kroger, Ralphs, Albertsons, Safeway and Vons - said he was concerned that the technology would displace human workers.

"We will be watching," the statement said. "It remains to be seen what Giant is ultimately using this technology for."