"Would you consider to become my friend. I'm 90 years old - live alone and all my friends have passed away. I am so lonesome and scared. Please - I pray for some one." 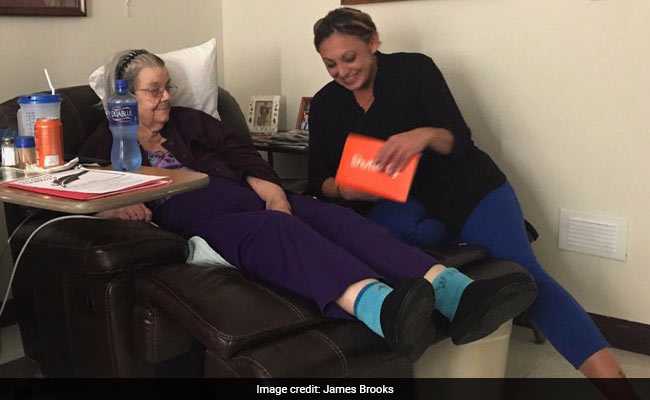 This past spring, Marleen Brooks, a 37-year-old property manager in the small town of Park Hills, Missouri, came home to find a handwritten letter from a 90-year-old woman she had never met.

It was just a few lines:

"Would you consider to become my friend. I'm 90 years old - live alone and all my friends have passed away. I am so lonesome and scared. Please - I pray for some one."

As Brooks read the letter, her eyes teared up. Her own grandmother, who had raised her, had died alone in hospice, which still bothered her. The letter-writer, Wanda Mills, had left an address - a house across the street and a couple of doors down. "I literally, honestly didn't know anybody lived there," said Brooks, who has lived on the street for a year and a half.

The next day, she and a friend brought cupcakes to Mills.

"She was excited that we came over there, and we sat and talked for about an hour," Brooks recalled. Mills, who has trouble walking and uses oxygen, told her that she hadn't left her house in seven years and relies on caregivers who come daily. But they weren't the same as having friends. After her meeting with Wanda Mills, Marleen Brooks started a Facebook group called Penpals for Seniors

Mills had lived in the house for 51 years. Her husband and sister had died, as had one of her sons. Another son lived out of state. It turned out that a third son lived next door but didn't visit often, she told Brooks.

Loneliness and isolation have been shown to have detrimental effects on health, leaving people more vulnerable to infection, cognitive decline and depression. An AARP survey found more than one third of older Americans to be lonely.

Brooks wondered how many others out there were living like Mills, unknown to their neighbors. She took a picture of the letter and posted it on Facebook, urging people to make sure to check on their neighbors and inviting them to send letters to Mills, and opened a post office box for her.

Then she had an idea: Why not invite people to write to more people than just Mills? In late April, she started a Facebook group called Penpals for Seniors, offering to match participants with older people who want to correspond by mail.

In a little more than a month, around 6,000 people had responded - far more than she had older people for them to write to. "We're still actively trying to find seniors," she said, adding that she has posted fliers and sent letters to churches, senior centers, home health agencies and nursing homes to let them know about the service. "That's been the hardest part."

So far, around 500 letters have been exchanged. Members include a mail carrier in Ohio who had isolated seniors on her route. Brooks said high school classmates that she hadn't heard from for years have contacted her. Employees at her local post office call her "Pen pal Girl." 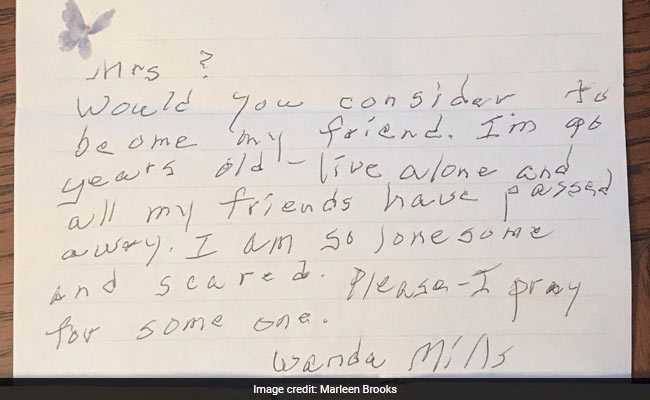 Wanda Mills' letter that started her friendship with Marleen Brooks.

Rosina Ragusa of Hawthorne, New Jersey, saw the service on Facebook and signed up after her own mother died in July. "It kind of just broke my heart, because I thought, 'What if I hadn't been there for my mother?' " she said. "You just never know who needs a friend."

The act of writing a letter on a piece of paper has brought Ragusa back to her childhood, when she had a pen pal in Japan. "I love it, I love having to sit down and think about what I'm writing instead of the quick responses with a cellphone and a computer."

Georgia Parker, 40, of Dittmer, Missouri, corresponds with a woman in her late 60s in Windsor, Canada. Her own mother died two years ago, but "as you go through life and things happen, I want to call my mother and I want to tell her about it. I can write Faye and tell her," she said. "It's good to still have that connection with the older generation."

Another member, D'Linda Wallace of Munsing, Michigan, said that in the store where she works, older customers often want to linger and talk. Seeing Mills's letter on Facebook made her wonder how many of them suffered from loneliness and isolation.

"I don't think people are going to always say, 'I'm lonely,' " said Wallace, who has exchanged a dozen letters with her pen pal since she signed up three months ago. "I don't think it's going to be revealed, due to people's pride and stuff, but I think it's more widespread than you would ever know."

A couple of weeks ago, Mills moved to a nursing home; Brooks and her husband and sons visit regularly. Speaking on the phone from her room there, Mills told The Washington Post that hardly anyone had visited her at home in recent years.

"Neighbors don't neighbor like people used to. Neighbors used to visit each other. But they don't do that there, I don't guess they do anywhere."

In fact, when Brooks initially showed up at her door in response to the letter, she was surprised.

"I needed friends," she said, adding, "I thought it was nice, to want to help somebody."

(This story has not been edited by NDTV staff and is auto-generated from a syndicated feed.)
Comments
wanda millsmarleen brooksPenpals for Seniors