This Hotel Offers A Room Only For $1 Per Night, But Here's Your End Of The Deal

Japan's One Dollar Hotel: The tariff for room no. 8 in the Asahi Ryokan hotel in Fukuoka is only $1 per night. The rate, which is otherwise about $27 a night at the 10-room hotel, is $1 only for room no. 8. Here's why. 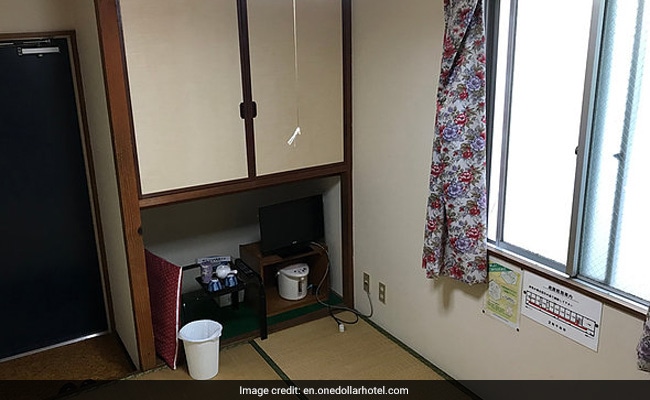 Asahi Ryokan Hotel: You can stay at this Japanese hotel for $1 - if you live-stream almost everything

The voyeurs around the world logged onto a YouTube stream Wednesday, hoping to see a random hotel guest scurry about their room. Instead, the viewers were greeted with an empty manager's chair and a whiteboard registering mutual disappointment: The guest canceled tonight...

"A quiet night will have to do."

Tetsuya Inoue was soon in the chair, just before midnight Toyko time, patiently explaining his concept of newly viral Room No. 8 in the Asahi Ryokan hotel in Fukuoka, a western Japanese coastal city.

But there's a catch.

They have to appear on a constant live-stream from inside their room, as long as they don't have sex.

Inoue told CNN that he got the idea after a British traveler live-streamed his stay in the hotel, and says it is the only hotel with such a proposal.

The camera in the minimally furnished room is typically located on a table, but it is out of view of the common area toilet and shower, Inoue told USA Today. The microphone attached is disabled for some semblance of privacy, but can be activated for those guests especially thrilled by being watched.

The rate is about $27 a night at the 10-room hotel, Inoue said in a video, and only Room 8 carries the live-stream deal.

There are other precautions for the "One Dollar Hotel" room. Guests should conceal private information from prying eyes, like passports and credit card numbers, the website says.

Inoue has been the manager since last year for the hotel owned by his grandmother, CNN reported.

But the live stream started three days ago, and it's unclear how many guests have taken on the challenge. He did not return a list of questions submitted by The Post.

But he has a backup plan for people looking to watch other people. He sets up a camera in his office, pointed at himself as he chats live with some of his new fans.

The publicity is working. The previously obscure, bare-bones hotel has added nearly 3,000 YouTube subscribers. And the channel can use ads when it surpasses more than 4,000 of viewing hours.

Inoue sat intently at his keyboard, watching the chat-stream endlessly scroll past him.

Conversation did not really touch on Fukuoka, where tourists can admire a plum tree-ringed shrine, or slurp down rich bowls of tonkotsu ramen, the local specialty.

Users were more interested in what they can see from thousands of miles away.

"Hi there to all my peeping toms :);)" one user chimed in, to immediate admonishing by others.

"why you gotta make it weird tino," Ruinga said.

Robert M proclaimed the concept could make a lot of money.

The excitement and expectations were a lot for Inoue. He moved the camera to capture himself wrapped in a white blanket, along with a new whiteboard message telling his viewers he was going to bed.