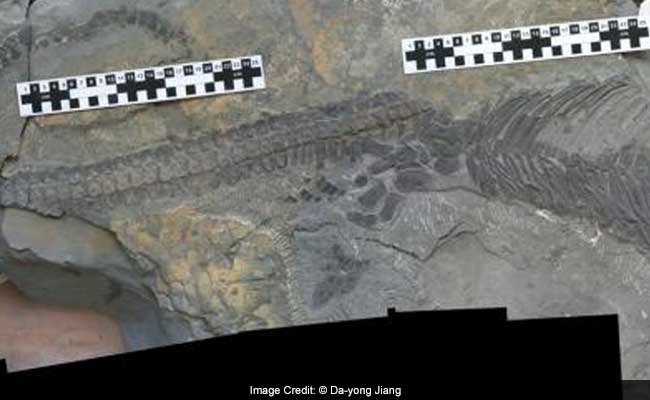 Sclerocormus parviceps, a newly discovered marine reptile is giving scientists a glimpse into the wondrous feats of nature in the face of adversity.

A newly discovered marine reptile is giving scientists a glimpse into the wondrous feats of nature in the face of adversity. Sclerocormus parviceps lived about 247 million years ago - in the aftermath of the most devastating mass extinction we know of, often referred to as "The Great Dying." Some 96 percent of all species went extinct, and changes in ocean temperature and acidification meant that marine creatures were hit the hardest. But about a million years after this bloodbath, an oddball ichthyosaur shows just how quickly the planet bounced back - and evolved astonishingly diverse new species.

When mass extinctions occur, new kinds of plants and animals are able to flourish. That's why humans exist: The extinction event that killed the dinosaur left the Earth without a reigning champ, so to speak - most of the planet's massive predators (and most voracious vegetarians) disappeared. Some tiny, rodent-like mammals happened to have the right skill set to survive the carnage, and in the new world they had a sudden abundance of food and lack of predators.

They (and other surviving animals) quickly evolved to fill all the different ecological niches left behind by dinosaurs, from the giant predators to the lazy grazers. Today, mammals fill many of the slots left behind by the dinosaurs. If another mass extinction wiped out most mammals, some other group would likely evolve to take spots left by humans, cheetahs, rats and everything in between.

So it's no surprise that ichthyosaurs such as Sclerocormus parviceps, a new species described Monday in Scientific Reports, were going through some serious changes in the wake of the Permian mass extinction. These dolphin-esque marine reptiles - contemporaries of some of the earliest dinosaurs - had plenty of room in the ocean to stretch out, adapt and evolve into a variety of new species. But Sclerocormus parviceps (although thought to be closely related to previously discovered ichthyosaurs based on its skull shape) is a weird one, with enough adaptations to surprise the scientists who discovered it.

Most ichthyosaurs have long, narrow snouts; parviceps has a nose so short that its name means "small skull." Ichthyosaurs generally have plenty of conical teeth; parviceps was toothless, seemingly sucking up its food with a syringe-like proboscis. And while most of its relatives have triangular, fish-tail-like fins, the new species sported a long, whip-like tail that took up about half of its 5-foot-long body. So Sclerocormus parviceps suggests that ichthyosaurs were a diverse bunch by 247 million years ago - even though they didn't have all that much time to get there.

"What it is telling us is that very soon after this massive extinction event there was a radiation and filling of all these vacant niches, and biodiversity of forms, that took place much, much quicker than we had previously imagined," study co-author Nick Fraser of the National Museums Scotland told The Guardian.

Researchers don't have many fossils from this period, so it's likely that there are other oddball ichthyosaurs they haven't discovered yet - perhaps some even further from the norm than Sclerocormus parviceps.

It's thought that this particular species came and went fairly quickly. But the ichthyosaurs's rapid evolution served them well, and members of the group persisted until just 90 million years ago.

Understanding their ancient origin story could have important implications for the modern world, the researchers say.

"We're in a mass extinction right now, not one caused by volcanoes or meteorites, but by humans," study co-author Olivier Rieppel, the Field Museum's Rowe Family Curator of Evolutionary Biology, said in a statement. "So while the extinction 250 million years ago won't tell us how to solve what's going on today, it does bear on the evolutionary theory at work. How do we understand the recovery and rebuilding of a food chain, of an ecosystem? How does that get fixed, and what comes first?"