Thieves Steal Sweden's Crown Jewels And Escape In A Speedboat

On Tuesday, two thieves stole a 17th-century orb and two golden crowns from a cathedral near Stockholm where they had been on display in a glass box, before escaping by speedboat. 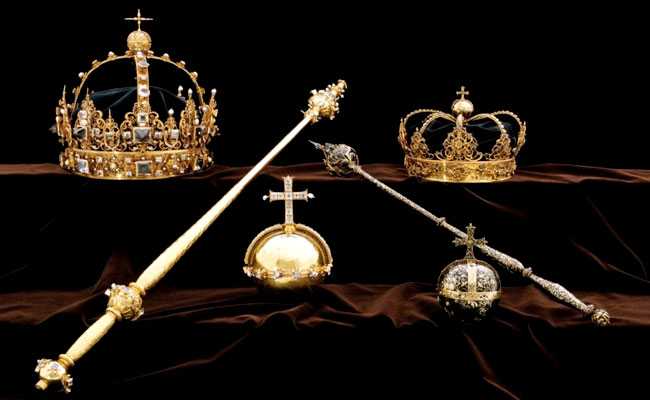 The crown jewels were on display in Strangnas Cathedral situated 100 kilometers from Stockholm.

Sweden's royal family still regularly captures Europe's attention with glamour, gossip - and the shiny crown jewels that are put on public display whenever the occasion merits it.

That particular part of the century-old tradition will become much more difficult now that at least some of the priceless Swedish crown jewels are no longer in the hands of the royal family. Around noon on Tuesday, two thieves stole a 17th-century orb and two golden crowns from a cathedral near Stockholm where they had been on display in a glass box, before escaping by speedboat into the Malaren lake, which spans 74 miles and is filled with hundreds of small islands.

A spokeswoman for the cathedral said Wednesday that an alarm went off after the two men accessed the jewels and that security precautions were in accordance with strict guidelines.

Even though the royal family appears to have insurance covering the jewels, officials stressed that their value could hardly be measured or replaced. "It is not possible to put an economic value on this. It is invaluable items of national interest," police spokesman Thomas Agnevik told Swedish media.

According to witnesses, the two men used women's bikes to race toward a motorboat near the bay by the cathedral, as stunned visitors watched the drama unfold.

"The two men hurriedly jumped on board, and it sped off," visitor Tom Rowell told the Associated Press.

The subsequent manhunt - with one helicopter and multiple boats - has not yielded any arrests, and authorities appear to have few indications about where the thieves may have escaped.

Jewel heists, often a popular subject for movies, remain a big business, with France the undisputed capital after a string of daring operations, including one carried out by an organized-crime group from the Balkans that also used a speedboat to escape after robbing a jewelry store in St. Tropez in southern France.

The theft in Sweden comes months after French authorities recovered jewelry worth about $5 million that was stolen from a luxury hotel in the most recent daytime robbery targeting brands as well as celebrities, such as reality TV personality Kim Kardashian West. Last year, several people were arrested on suspicion of involvement in a 2013 heist in Belgium in which diamonds worth more than $50 million were stolen at Brussels Airport.

Sweden's crown jewels haven't been worn since the early 20th century and are used mainly for display purposes these days. But all those displays, in addition to catching the eyes of thousands of visitors, seem to also have caught the attention of thieves. In 2012, a friend of the royal family was convicted of stealing royal jewels worth more than $120,000, which he had purloined from a private apartment belonging to Princess Christina, the sister of King Carl XVI Gustaf.

At the time, the thief was able to sell only some of the stolen valuables, throwing the rest of the loot off a bridge instead.

The thieves behind this week's theft may face similar challenges, officials said Tuesday.

"What usually happens with this type of object is that they are recovered sooner or later, because there are very few people who are prepared to handle such items," Agnevik was quoted as saying by Swedish media on Tuesday.

"We have high hopes of getting them back," he said.

(This story has not been edited by NDTV staff and is auto-generated from a syndicated feed.)
Comments
Swedencrown jewels