For 50 years, research on these rocks has transformed our understanding of the moon, revealing the circumstances of its birth and the reasons for its mottled face. 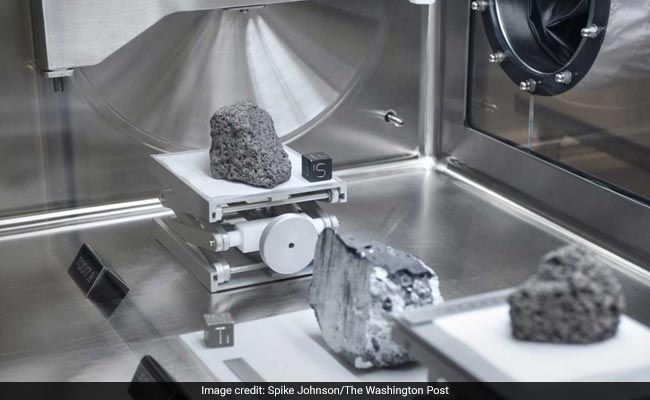 The first person to set foot on the moon had one last task before he came home.

Neil Armstrong needed to pick up rocks - as many as he could carry, as interesting as he could find. The material he collected would constitute humanity's first samples taken from another world.

With less than 10 minutes to go before the end of his moonwalk, Armstrong used tongs to pile about 20 rocks into a specialized collection box. Deciding it wasn't full enough, he scooped an additional 13 pounds of lunar soil into the container.

Today, a tablespoon of that soil sits in a sealed dish in a locked and windowless lab at Johnson Space Center in Houston. It is a prized piece of the Apollo program's greatest scientific legacy: nearly 850 pounds of moon rocks.

For 50 years, research on these rocks has transformed our understanding of the moon, revealing the circumstances of its birth and the reasons for its mottled face. Now, NASA has decided to release three new samples for analysis - samples that no scientist has touched.

The upcoming experiments, on vacuum-sealed cores and a long-frozen rock, can be performed only once, at the precise moment the samples are opened. That's why the materials have been held back since they were retrieved from the moon, said Ryan Zeigler, who curates the Apollo rocks collection. NASA was waiting for the right scientists, with the right technologies, at the right time.

With Apollo 11's 50th anniversary this year and renewed interest in the moon ahead of a proposed return mission, Zeigler said, the right time is now.

NASA's Lunar Sample Laboratory, a maze of gleaming metal cabinets and spotless linoleum floors, was built in the 1970s to house the rocks brought back from six moon missions.

A sophisticated HVAC system, designed to keep the air 1,000 times cleaner than in the outside world, fills the facility with a faint artificial breeze. Scientists enter only after donning special white jumpsuits, caps and booties to limit contamination.

These are some of the most valuable rocks in the solar system, Zeigler said. Just look at what they have revealed so far.

Before the Apollo 11 mission, scientists couldn't agree on where the moon came from. It's a misfit in the solar system - much larger relative to its planet than almost any other moon. Some speculated that it was once an independent object that was "captured" by Earth's gravity. Others proposed that the satellite formed in orbit alongside Earth when the planets were coalescing out of a primordial dust disc. Many grade-school textbooks taught that it was, in fact, a blob of Earth that had been flung away by our planet's spin; the Pacific Ocean was thought to be a scar from this ancient loss.

All of those theories had to be discarded as soon as scientists saw the first Apollo rocks.

The moon materials were extraordinarily ancient - as old as 4.5 billion years. Although they contained many of the same chemicals as rocks from Earth, they were startlingly poor in "volatiles" - molecules like water and carbon dioxide that easily vaporize when heated. Some contained features produced only in cataclysms - showers of meteorites, blasts from volcanoes, or barrages of particles from the sun.

At a conference to discuss the initial findings six months after Apollo 11 returned to Earth, no one could agree on what all this evidence meant.

Then, toward the endof the conference, geologist John Wood explained how the clues fit together. He realized that the strange white flecks in Armstrong's hastily gathered soil sample belonged to an unusual type of rock called anorthosite, which forms when the mineral feldspar crystallizes out of molten rock. 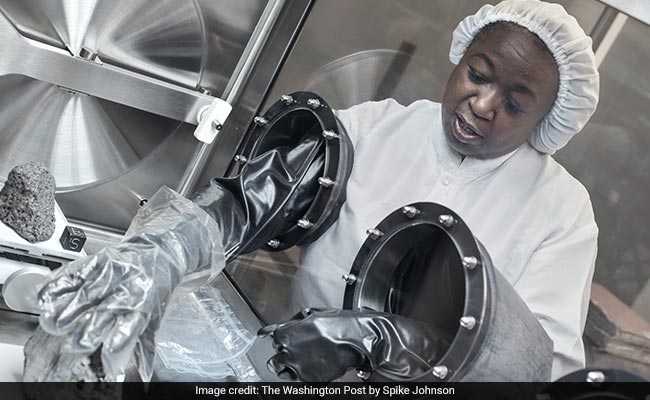 Andrea Mosie, Apollo sample processor, handles samples inside their airtight containers at the Lyndon B. Johnson Space Center in Houston on March 19, 2019.

At some point, Wood reasoned, the moon must have been completely covered in a magma ocean, in which anorthosite rocks floated like icebergs. The molten world would have cast an eerie, blood-red glow in Earth's night skies.

To confirm Wood's theory, scientists needed bigger and better samples. They got what they wanted in 1971, when Apollo 15 astronauts James Irwin and David Scott uncovered a half-pound chunk of anorthosite on the rim of a crater in the moon's northern hemisphere.

Cleaning the dirt off the rock's exterior, Scott realized what he was holding and started to shout. "Oh, boy!"

That sample came to be known as "the Genesis rock" - a nod to the role it played in helping scientists unravel the story of the moon's origins. It sits inside its own glass case, not far from the dish containing Armstrong's soil.

"These exact samples told us how the moon formed," Zeigler said.

About 4.5 billion years ago, the theory goes, a long-gone giant planet called Theia, named for the mother of the Greek moon goddess, smashed into the newly formed Earth. The impact shattered both Theia and the proto-Earth and splashed millions of tons of material into space. Some of the rock coalesced in orbit around the Earth, and our satellite was born. The heaviest bits sank to the moon's center, while the light minerals floated to the top of the worldwide magma ocean and crystallized, forming the thin anorthosite crust. The rocks and dust retrieved by Armstrong and Scott are relics of this long-ago tumult.

Many researchers were skeptical of this "giant impact hypothesis" when it was first proposed in the mid-1970s. Astrophysicist Alastair Cameron, one of the architects of the hypothesis, recalled a colleague dismissing one of his presentations as "cosmic schmoo." The idea seemed too arbitrary, too catastrophic, too strange.

But the evidence was strange, Cameron pointed out, and only the giant impact seemed to fit it. It was big enough to generate the global magma ocean in which the anorthosite formed. It explained why the moon's and Earth's chemical fingerprints were so similar - they formed from the same swirl of exploded rock. It accounted for the missing volatiles, which would have been blown into space when Earth and Theia collided. 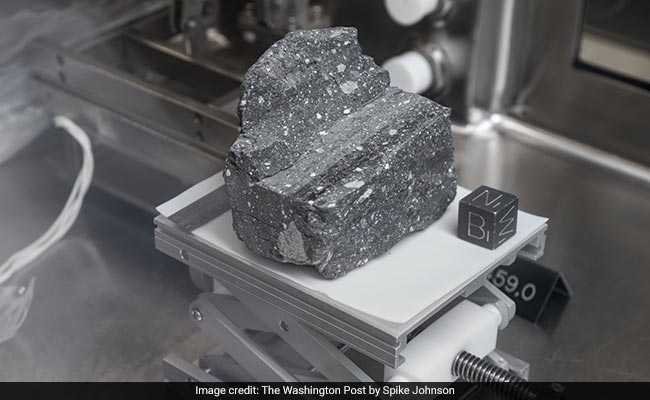 A large sample of moon rock i8s contained in airtight tanks at the Lyndon B. Johnson Space Center in Houston, Texas on March 19, 2019.

The hypothesis was also supported by data from science experiments astronauts performed during their time on the lunar surface. Seismometers deployed by Armstrong's comrade Buzz Aldrin and his successors on later Apollo missions revealed that the moon has relatively little iron at its center. After the collision, the theory goes, heavy elements such as iron sank into Earth's core while lighter elements were blasted away into what became the moon. (Notably, Earth is the densest planet in the solar system.)

Other rocks have helped us "see beyond the moon" to the history of the whole solar system, Zeigler said. Most of Earth's geologic record has been weathered by water and wind or swallowed up by plate tectonics, but the moon's surface still bears the scars of every volcano that ever erupted and every meteor that ever crashed into it. Lunar samples provided evidence for an era called the Late Heavy Bombardment, when the inner planets were assaulted by a barrage of asteroids, right around the time that life arose on Earth. And by counting craters on areas of the moon whose ages are known from the Apollo samples, scientists have established a system for estimating the ages of features on other planets.

Studying material from the moon up close hasn't completely explained its history. For one, researchers can find no molecular fingerprints of Theia - the object whose collision with Earth purportedly created the moon. Nor can scientists agree on how traces of water wound up inside the samples, when the global magma ocean should have boiled it all away.

"For certain, the story is not complete," Zeigler said.

NASA hopes that the three newly available samples - which represent half of all the lunar material the space agency has in reserve - will help answer these questions.

Some researchers will look for traces of water in a rock that has been stored in a freezer for nearly 50 years. Others will seek out volatile molecules, including water, trapped inside tiny glass beads formed from lunar lava fountains that erupted billions of years ago.

Several teams will work together to examine the materials inside pristine vacuum tubes that were sealed by astronauts while they were still on the moon. The way the rocks are layered may offer insight about landslides that shape the lunar landscape in the absence of wind, weather and life. Captured gases carry clues about how the material was altered by radiation, which in turn will help scientists understand how long the rock was exposed to light before astronauts boxed it up and carried it away.

Some measurements, like the analysis of the captured gas, can only be made at the moment the canisters are opened. Scientists will spend months rehearsing the experiment on practice tubes containing samples from Antarctica before the big event.

"It's exciting to open up something new," said Barbara Cohen, a planetary scientist at NASA's Goddard Space Flight Center who will lead the gas analysis. "We don't know what we'll find."

At the annual Lunar and Planetary Science Conference meeting in Houston this spring - the 50th event since the one where the Apollo 11 samples were first discussed all those years ago - announcements about the upcoming experiments were met with loud applause.

The United States hasn't taken any new material from the moon since the last Apollo landing in 1972, and no lunar rocks have been brought to Earth since the Soviets' Luna 24 probe flew four years after that. China has plans for a sample return mission this year, and President Donald Trump has directed NASA to send astronauts back to the moon by 2024. But a 2011 law bars U.S. federal scientists from collaborating with China's space agency, and a lack of funding for NASA has raised skepticism about Trump's proposed moon shot.

To fully answer lingering questions, "we need a better global representation of lunar rock types," Cohen said. And for that, "we need to go back."

But in the meantime, she said, the decision to open the Apollo samples is like "a mini mission" unto itself; one more chance to probe a piece of another place; one more chapter in the story of the moon.